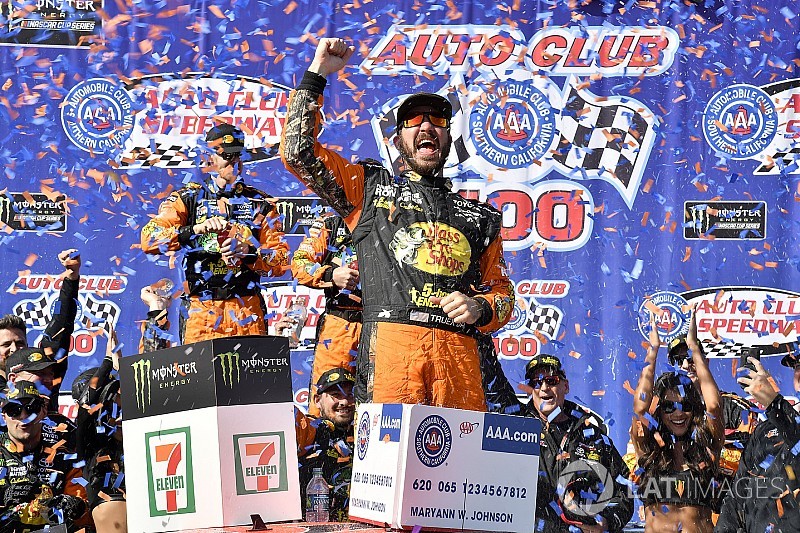 Martin Truex Jr. passed Kyle Busch for the race lead with 32 laps to go and never looked back, winning the Auto Club 400.

"We just kept fighting hard and never gave up on it (car)," said Truex in Victory Lane. "I knew we had a really good race car and honestly after the first adjustment of the race it really came alive. From there it was just about managing my tires and being smart. We had a little trouble getting beat out of the pits and that was tough and fell back to fifth and had to work our way back up and I had to take care of our front tires."

The third and final stage kicked off with Kyle Busch out front, but the run was brief as a cut tire for David Ragan brought out another caution with 72 laps to go.

Despite the short run, the field decided to come down pit road for fresh rubber. William Byron won the race off after a two-tire call, but restarted second due to Kasey Kahne staying out.

However,Busch made quick work of them both, while the two Penske cars split he and Truex. Truex would eventually pass them both and set his sights on the race lead. With 39 laps to go, he was able to clear Busch after running him down from two seconds back. He then made his final stop of the race two laps later.

Busch followed him down the pit lane and narrowly beat him off, but it would all be for not. Truex took the lead back with 32 laps remaining in the race and set sail. Now struggling an ill-handling car, Busch fell back into the clutches of Kyle Larson, who went on to finish second, a full 11.6 seconds adrift of Truex.

“I’m just tight loose. I don’t know what to do with this thing. I can’t go up, I can’t go down,” complained Busch, who finished third.

The Team Penske drivers of Brad Keselowski and Joey Logano rounded out the top five.

"We knew we were going to be a little free on that first run and we just had to make our way through it and then we took a swing at tightening up (the car) at the first stop and we didn't touch it the rest of the day," said crew chief Cole Pearn.

"We knew would shy on the free side and we struggled being tight on all these mile and a halves and big tracks and we just had to get the car tightened back up and once we did the speed was definitely there."

Kyle Larson on Harvick wreck: "We were both racing really hard"