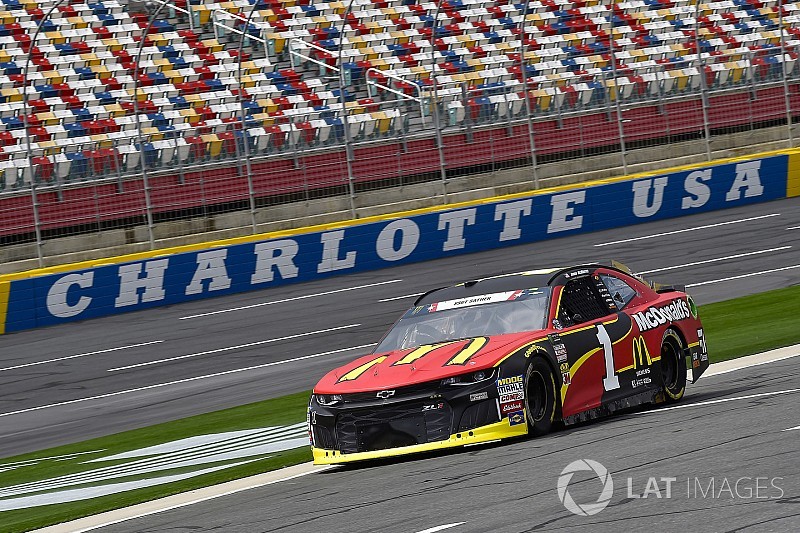 Chip Ganassi Racing has been the most consistently performing of the Chevrolet NASCAR Cup Series teams this season but still lacks a victory.

Kyle Larson already has two runner-up finishes in the first 13 races and led the most laps at Kansas before finishing fourth.

Larson’s teammate, Jamie McMurray, had his best race of the year Sunday night in the Coca-Cola 600 before eventually finishing sixth.

So, how close is CGR to pulling in Victory Lane?

“We had a really good car (at Charlotte), and we’ve come a long way — especially the Chevys from the beginning of the year (on) mile-and-a-halfs,” McMurray said after Sunday’s race. “I think in less than a month we will contend to win.

“That is a good feeling.”

It should be considering the struggles Chevrolet teams have had since debuting their new model Camaro at the start of the season.

Austin Dillon from Richard Childress Racing opened the season with a victory for Chevy at Daytona, but that was in a superspeedway race, not indicative of how the majority of the season would play out.

Since then, CGR has been the Chevy organization that has looked like it had the best chance to score a victory.

McMurray’s strong run Sunday night was just his second top-10 of the season. He was third at Texas in a race that saw Larson crash out.

In the 600, Larson appeared to have a strong car as well – running as high as second – but had to rebound from a spin in Stage 3 to finish seventh.

“I’m bummed I gave up some track position when I got into the wall, but I was glad to see our team stay with it and come back for a top-10 finish,” said Larson.

“Our DC Solar Chevy was pretty good all night, but we had to adjust on it throughout the race to stay ahead of some vibrations in the rear of the car. We had a shake to start the race, and I think that’s what upset me when I got into the wall, but we were able to work around it.

“This hasn’t been a great race for me, so glad to see us come away with a good finish.”

McMurray remains optimistic about the team’s progress this season.

“(Larson) should have won Kansas, and we were off there, but both of our cars were good (at Charlotte),” he said. “It just seems like every day they get a little bit better.”

Mailbag: Will NASCAR look at new venues down the road?