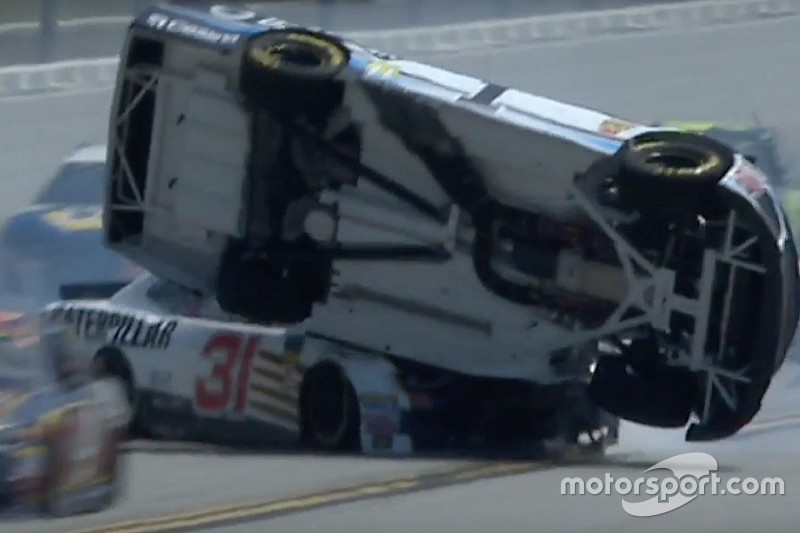 Jamie McMurray ended up fastest in Friday’s final Monster Energy NASCAR Cup Series practice session at Talladega but it’s not going to help him on Sunday.

Within the first five minutes of the session, it appeared McMurray had a left-rear tire go down in the middle of the backstretch and he turned right in front of Ryan Newman. McMurray’s No. 1 Chevrolet flipped up and over Newman’s No. 31.

McMurray’s car proceeded to roll over three times before catching part of infield catchfence and then coming to a rest on the track on its wheels.

“I think I blew a left-rear tire out,” McMurray said. “I’ve been racing before and I’ve never done the roll like that before. I opened my eyes a couple times. I was just thankful that it landed upright.

“When the car is tumbling you can’t tell where the impact is coming from and you don’t know how many other cars might be involved.”

Ty Dillon checked up and spun behind the incident and Daniel Suarez was also involved. All four teams had to go to backup cars and will have to start Sunday’s GEICO 500 from the rear of the field.

“When I hit the brakes they had nowhere to go behind me,” said Dillon, who was fastest in Friday’s first practice session. “I think (McMurray’s team) may have been pushing a little too far and ended up with a tire rub on the rear tire.”

Newman, a vocal critic in the past of restrictor-plate racing, tempered his response when asked about McMurray’s car getting airborne.

“It’s unnecessary and it needs to be addressed,” he said. “I’ll leave it at that.”

None of the drivers involved were hurt. McMurray had just posted the fastest lap of the day so far before the incident (203.975 mph).

Rounding out the Top 10 were Newman, Paul Menard, Brendan Gaughan, Kevin Harvick and Aric Almirola. Harvick completed the most laps in practice (22).