KANSAS CITY – 5-hour ENERGY announced today it will sponsor Michael Waltrip Racing’s No. 15 Toyota driven by Clint Bowyer for the all but one of the remaining races in the 2012 NASCAR Sprint Cup season. 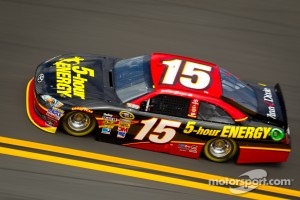 The move increases 5-hour’s sponsorship from 25 to 37 events.

“5-hour ENERGY is extremely excited about the consumer exposure and sales growth we have achieved since moving up to the NASCAR Sprint Cup Series and partnering with Michael Waltrip Racing and Clint Bowyer this season,” said Scott Henderson, president of 5-hour ENERGY.

“We have measured real growth through our retail partnerships, in-market activation, sales growth and brand awareness. The numbers show we’ve exceeded all expectations. This increase allows us to target even more markets. We’re business people and the numbers show NASCAR delivers the audience we need to market our product.”

Bowyer ranks 10th in the NASCAR Sprint Cup Series points standings after the first seven races of 2012. He finished a season-best fourth at Bristol, has three top-10 finishes, led five laps and averages a 13th-place finish.

Waltrip said the team’s internal numbers show the No. 15 Toyota has garnered tremendous exposure for 5-hour in the first seven races.

“Nobody beats NASCAR in what it can do for race sponsors,” Waltrip said. “We’re on national television 38 weekends a year, all over the media during the week and have one of the greatest, most loyal fan bases in sports. Our fans know the more they support our sponsors the more the sport will grow. 5-hour ENERGY is the latest success story. I couldn’t be more proud of what we’ve been able to accomplish for them both on and off the track.”

Aaron’s will sponsor Bowyer at Talladega Superspeedway on May 6 in his only non-5-hour race in 2012. The car will honor the University of Alabama’s BCS National Championship football team.

Biffle has led the way for Roush Fenway at Kansas