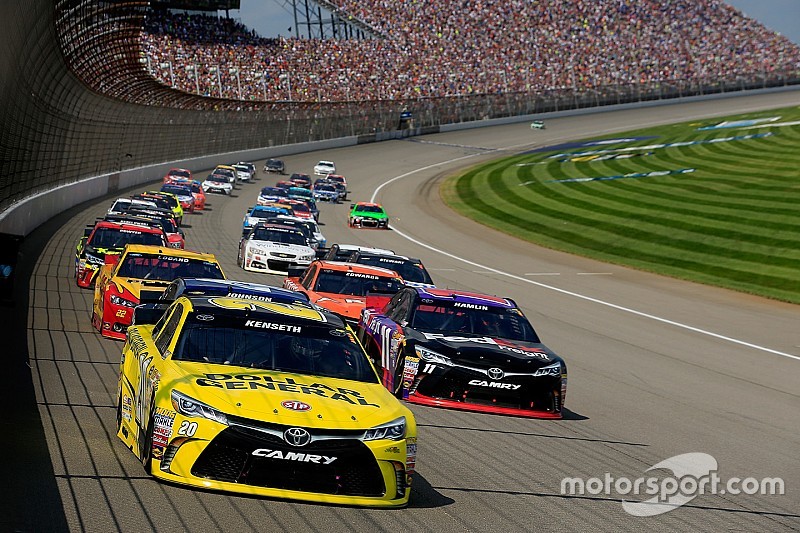 What’s smaller? The spoiler, the splitter, the deck fin — and subsequently — the amount of downforce and side force of the cars.

With the modifications to the cars at this weekend’s race at Michigan International Speedway, the downforce has dropped to 1,500 pounds. The reduction is divided between the front of the vehicle, where the splitter was shaved from 5 to 2 inches wide, and rear which NASCAR trimmed the top of the spoiler by one inch (from 3.5 to 2.5 inches), the width from 64 inches to 53 and tapered the side fin (which continues along the deck lid to the new spoiler).The reduction has also decreased side force by 110 pounds.

The effort to improve the racing

“The reasoning for taking the downforce and the sideforce off the car, obviously we take the aerodynamic forces off the car, it makes the car a bit more difficult to drive for the drivers, but in taking those aerodynamic devices off, we do clean up the amount of air or turbulence around the cars so the cars should be able to move around each other better and pass,” said Gene Stefanyshyn, NASCAR senior vice president, innovation and racing development.

“I think the best way to describe it is the car as it goes through the air, it casts this aerodynamic shadow, and we're trying to make this shadow as small as possible so the other cars around it don't feel the effects of the shadow, as it were.”

NASCAR debuted modifications to the car at the All-Star Race at Charlotte Motor Speedway last month to rave reviews prior to Michigan. Teams will race this same package at Kentucky Speedway in on July 9. The sanctioning body has a test scheduled on the newly paved 1.5-mile track scheduled for Monday and Tuesday with 14 cars. Kentucky Speedway also increased the banking in Turns 1 and 2 from 13 to 17-degrees.

If the industry — and the fans — continue to support the lower downforce configuration, it will serve as the basis for the 2017 rules package which NASCAR hopes to present to teams by August 1.

“I think it's difficult to visually see the difference, but when you look at the data from the cars, the speed trace is significantly different, the mid‑corner speeds are down a lot, the entry speeds are up a little,” said NASCAR senior vice president of competition Scott Miller. “And from some of the driver comments, having to use the brakes pretty hard and maybe even thinking about needing brake cooling and everything at a big track like this is a departure from where we've been before.

What are the drivers saying?

Sprint Cup drivers have advocated for less downforce on the cars since the COT was introduced. The alterations to the cars at the All-Star Race last month were well received.

At Michigan, cars slipped and slid through the corners — where NASCAR expected speeds to slow by 10-miles-per-hour. However, in first practice 12 cars exceeded the 200-mile-per-hour mark.

“Even though the speeds are up there, averaging 199, a lot of it is straightaway speed,” Denny Hamlin said. “What we really wanted was slower corners and faster straightaways and that’s definitely been achieved so far.

“Our opinion, the slower the pace is the better the racing is going to be. The more off-throttle time, the more opportunity there is for us to make a move on somebody in front of us. From the race fans perspective, they’re not going to notice if we’re running 200 (mph) or 185, but I can assure you that the 185 race is going to be better to watch.”

At a track where drivers are used to running wide open, brakes have never been a consideration. That has changed at Michigan with the rate of speed the cars are carrying into the corners before lifting. Several drivers were “slideways” when executing the corners too aggressively, Aric Almirola believes the difference in speed will offer competitors “opportunity”.

“The speed is relative and I am excited that we are letting off the gas and using the brake at a big track like Michigan and getting the corner speeds down…When you are at the end of the straightway at 200 or 205 and slow down to 195 or 198 mid-corner because the car has a lot of downforce and a lot of grip because you run practically wide open, there is not an opportunity to pass because the variation in speed is not there. Now with the variation in speed it gives guys opportunity. You can drive in the corner a little deeper. You can lift a little sooner. It really opens up the driver’s tool box, if you will.”

As Kurt Busch proved on the final restart at Pocono Raceway last week, restarts are as critical as ever to gaining track position. Busch was able to take the lead from Dale Earnhardt Jr. with 32 laps remaining in the race and sailed off to the win.

Restarts will be crucial

Brad Keselowski, who rolls off 15th on Sunday, says restarts will come into play.

“Restarts and track position are so critical right now especially as aerodynamics become so important,” Keselowski told Motorsport.com. “The front car has that clean air that we talk about all the time. So they’re as important now as they’ve ever been. Hopefully, as we continue to work on this package, they’ll become less important and we’ll see the racing dictated more over a green flag stretch then over the first lap of a run.”

Keselowski is pleased with the new aerodynamic package. Like many of the NASCAR veterans, Keselowski would like to see a little more tire fall off than what has occurred up to now with the lower downforce configuration. He believes, “That will be the key to opening the door with this new package.”

Kyle Busch's day ends in a "fireball" at Michigan