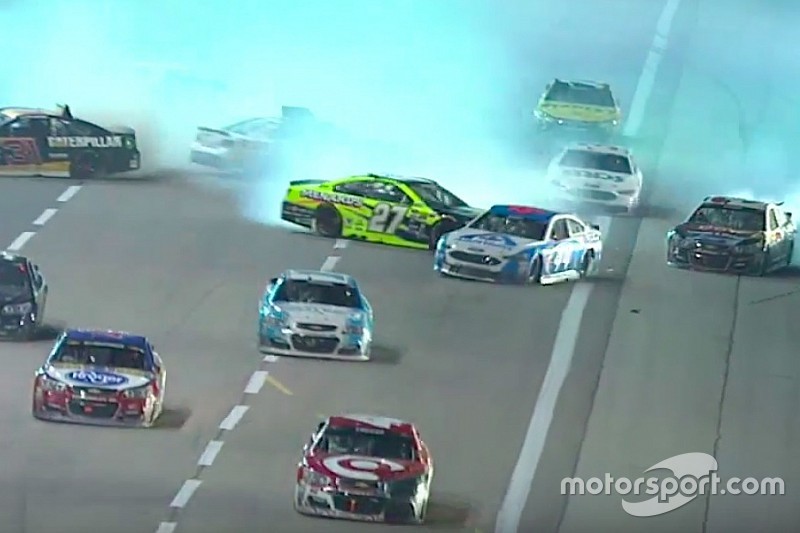 A relatively incident-free race at Texas Motor Speedway erupted into a multi-car wreck reminiscent of NASCAR’s superspeedways, collecting over a dozen cars.

On Lap 294 of 334, and while racing for position, Denny Hamlin got just close enough to Austin Dillon to send Dillon up the track and into the path of Jimmie Johnson.

Johnson hit Dillon from behind, sending Dillon’s No. 3 Chevrolet into the wall and then back down the track, where it collected several more cars.

When the dust cleared, 13 cars were listed in the accident, with serious damage done to Dillon, Brian Vickers, Ricky Stenhouse Jr. and Ryan Newman.

“I haven’t seen (the replay) yet. We were on older tires and I was trying to get all I could there. It’s part of trying to win a race," Dillon said. "We put ourselves in a position to be out front, thinking that two laps wouldn’t mean much, but it did. That’s part of it.

"The good Lord kept me safe tonight and gave me a good race car. You have to be gracious in defeat. We’ll come back next week with another fast car and hopefully we can do the same thing we did today, and that’s run up front."

While making repeated trips to pit road for repairs, NASCAR first penalized Dillon for speeding on pit road, then elected to hold him a lap for doing so repeatedly.

Kyle Busch wins for the fourth time in eight days