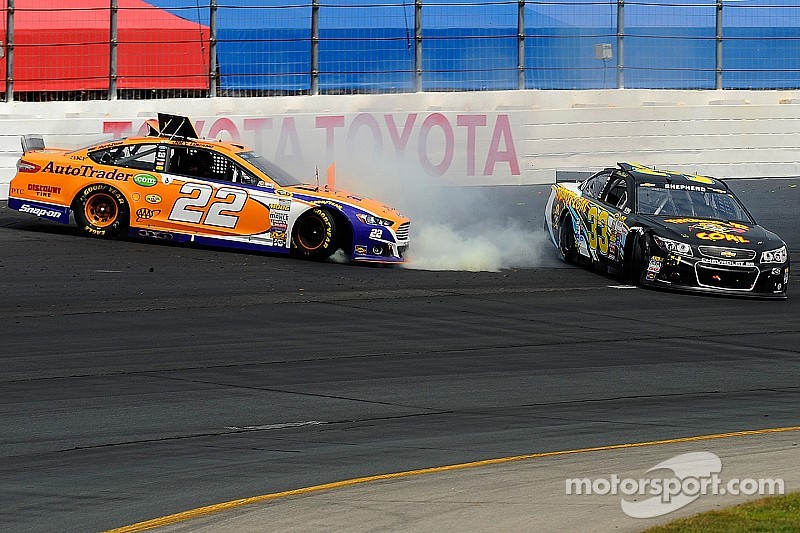 Shepherd, 72, who first campaigned on the Cup tour in 1970 when he was 28, appeared on SiriusXM NASCAR Radio on Sunday night with Claire B. Lang to defend his actions.

Shepherd initially offered a mea culpa for making contact with Logano, who was running second to his teammate and eventual winner Brad Keselowski, when the race-ending accident occurred on Lap 212.

Then Shepherd constructed an argument for why the incident had nothing to do with his age or his ability and deflected the responsibility back onto Logano.

Accidents happen and this didn’t happen because I’m 71 or 72 years old. The average 72-year-old guy couldn’t make a lap in these cars.

Shepherd acknowledged that his car was “off” at the time and “real loose”. Despite being 15 laps off the pace during the time of contact, the veteran insisted that he “was giving everybody room” long enough for the No. 33 Chevy to latch on the end of the line “then get back running”.

“In respect to the leaders and all, when they come, I go over to the bottom of the track on the apron and let them go by,” Shepherd said. “Accidents happen and this didn’t happen because I’m 71 or 72 years old. The average 72-year-old guy couldn’t make a lap in these cars.

“But Joey more or less caused the wreck. Yes, I was there. I was on the inside and I was having a problem with my car. Well, all real race car drivers know that if you go in side-by-side with a car, the car on the outside has the advantage. If he lays close to the car on the inside you can suck that car around and that’s kind of what happened to me. He laid real close to me and it caused me to lose the front end. My front end slipped over then and I got into him and caused the accident.”

Although Shepherd forgot what day Logano wrecked his primary car in pre-qualifying practice on Friday, he was quick to point out he wasn’t responsible for that. Logano had an issue with the left rear that sent the car into the wall.

“Every driver out there would tell you that I showed respect on the track when I wasn’t up to speed,” Shepherd reiterated. “I got out of their way. It was just a bad situation in Turn 3 that he came in real close to me and caused me to lose traction.”

No issue with drivers requirements

And while some questioned whether Shepherd maintained minimum speed throughout the event, NASCAR vice president Robin Pemberton said the driver met all of the requirements set by sanctioning body, “There wasn’t any issue with” his lap times.

Shepherd contends that his crew chief Rick Ren informed him he was faster than a handful of cars.

“We were running as fast as the cars in front of us and I could have passed some cars,” Shepherd said.

However, in addition to his handling issues, Shepherd had trouble getting his car out of gear and the engine shutting off. He explained that his lack of experience with electronic fuel injection exacerbated the problem.

How long Shepherd intends to compete remains to be seen. He told Lang he would continue campaigning on the Nationwide Series tour as long as he had friends to support him.

“I’ve always said, if I go out and started hitting the wall and start making mistakes, I’ll get out of the car,” Shepherd told Lang. “Ok, a mistake happened there. But it takes two of us to do it and it’s not like Joey had never made a mistake himself.

“I found out over the years, the races that I’ve won was easy. The times I run second was hard because you’re trying to do everything you can. That guy in last place has had to work 100 times harder than the guy leading the race. These cars are easy to drive when everything is working but they’re wicked when things are not working.

“This has got nothing to do with my driving ability. Yes, we wasn’t prepared with the car the way it was but again we was not the slowest car here. Things just happen.”