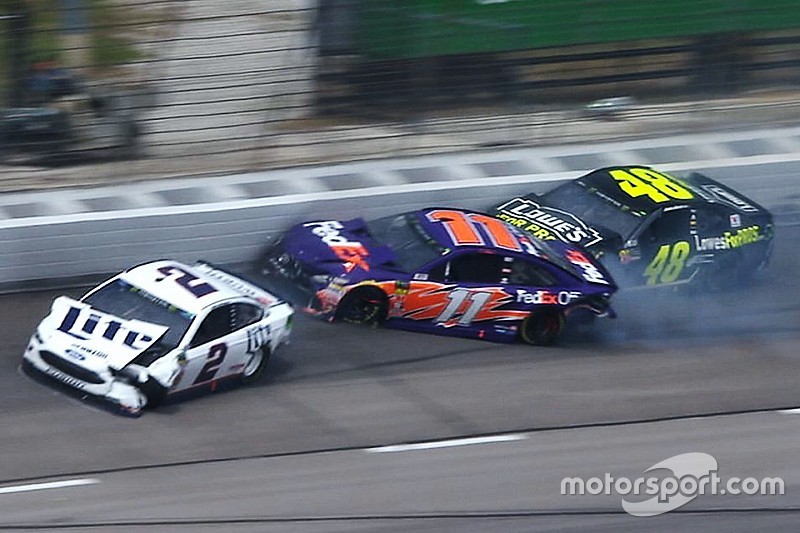 Just after a restart to kick off the final stage at Texas, a multi-car wreck forced NASCAR to put out the red flag and halt the race.

Erik Jones held the lead on the restart with teammate Kyle Busch beside up, but a bobble from Busch sent him sliding up the track and falling back.

Due to the loss of momentum, Aric Almirola got a run on the No. 18, but thought better of it and backed out entering Turn 3. Denny Hamlin got to the inside of Almirola, but could not hold the bottom and slid up into him, igniting a seven-car wreck that took out several contenders.

"I don't know what else I could have done anything different," radioed Almirola. "I backed out so not to do something stupid with the No. 18.

"The No. 18 got really loose in Turns 1 and 2 and I had a run down the back straightaway and I got inside of him," he added after emerging from the infield care center. "(Jamie) McMurray was to the inside of me and I didn't want to be in the middle entering Turn 3 so I backed out of it and let the No. 18 have the top and the No. 11 got loose under me and we just wrecked. It's just really hard when you come to these repaves. We're all fighting for the bottom. The middle lane is very sketchy and the third lane is even more sketchy, so you have to run right on the door of the car inside of you. Unfortunately, the car on the inside typically gets loose. I hate it."

"Shouldn't have been in that position," said Hamlin, blaming himself for an earlier speeding penalty that put him back into the pack. "Obviously the No. 18 was falling back there. The No. 10 made a move on the inside, everyone is fighting for the bottom. I was obviously running the bottom. The No. 10 tried to squeeze. I realized he was coming down and I got out of the gas and got loose underneath him."

Johnson came into this race as the defending winner, but he was among those who couldn't get through the melee.

"By the time I saw what was going on, the No. 11 was backwards and smoking the tires and coming up the track," explained Johnson. "I knew where his car was taking him and I knew I was in trouble in the outside lane and I was going to get into him some. And the crash just kind of continued from there. Unfortunate circumstances but a lot to build on from this weekend. A strong Friday, a fantastic Saturday, but not the best Sunday. We had a lot of things working against us today. We're getting closer each and every week and I'm really proud of everyone at Hendrick Motorsports."

NASCAR red-flagged the race on Lap 180 while they cleaned up the incident, which lasted for eleven minutes. The race resumed with Jones still out front.