Johnson said: "I feel like this team is capable of a lot of great things."

Jimmie Johnson steadfastly refuses to bask in his own greatness.

And, make no mistake, his accomplishments are extraordinary.

That's more than vaguely reminiscent of the six NBA titles Michael Jordan won with the Chicago Bulls in the 1990s.

Though he stands at the pinnacle of his sport, Johnson says he has never considered whether he is a world-class athlete.

"I've never thought of it," Johnson said after Sunday's race. "When you mention Michael's name, he's given me a hard time that I only won five. I can't wait to send him a text and say, 'Hey, buddy, I've caught up.'" 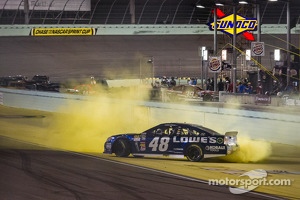 In all honesty, Johnson finds contemplation of his accomplishments counterproductive, even though winning five consecutive titles from 2006-2010 was an achievement every bit as formidable and every bit as difficult as Tiger Woods holding all four major championships at the same time.

Johnson's success derives from a narrow focus on the task at hand, one of the few personality traits he shares with crew chief Chad Knaus, an inseparable and indispensable part of the Johnson equation. The way Johnson sees it, there will be plenty of time to consider his body of work after his driving career is over.

"It's not like me to think in that light," he said. "It's just not me. I guess I need to open my mind to it, because the numbers speak for themselves. I find myself in a touchy situation at times, where my quiet approach can be looked at as arrogant or cocky, and that's the furthest thing from the truth in what I'm trying to portray.

"Honestly, I'm just trying to, I don't know, say the right things and keep my mind in the right space. I haven't let a lot in, and it's led to more success. It's kept my work ethic intact, kept me honest and humble. I like that about myself. I really, really do. I don't know if I want to open my mind and let it in, where I stand in the sports world. It's not time for that in my eyes."

Others are more than happy to voice their opinions about the six-time champion.

"Being out there and racing with him, I can say that I think he's the best that there ever was," said Denny Hamlin, Sunday's race winner. "He's racing against competition that is tougher than this sport's ever seen."

And next year, he'll be racing against history. A seventh championship would tie Johnson with NASCAR Hall of Famers Richard Petty and Dale Earnhardt for most all-time and further fuel the debate as to the greatest driver in the history of the sport.

Johnson knows the emphasis on that story is coming, and he's prepared for it.

"That reality I'm fine with, look forward to the opportunity, hope that I can certainly accomplish more," Johnson said. "I feel like this team is capable of a lot of great things. There's still great years out ahead of us, but all of that is in the future … a seventh, an eighth.

"I don't want to focus on that yet. It's not time. I want to unplug, enjoy the sixth, let it soak in. We'll get to Daytona for testing soon enough. I guess by then it's probably appropriate to ask the question."

Even if the question is appropriate, Johnson doesn't feel he's the right person to answer it.

"I'm humbled by the nice things that have been said by competitors and owners, my peers in this industry," he said. "I think their opinion is very important. I don't think my opinion matters. It's not for the athlete, the driver. It's bestowed upon you. It's passed down from others.

"If others are saying it, I'm not going to deny it, chase it away. Sure, I would love to be considered that (NASCAR's greatest driver). If you look at stats, there's still numbers out there that I need to achieve. That's why I say, until I hang my helmet up, it's not necessarily a fair conversation to have.

"[But I'm] honored to be in the conversation, and I know I will have to face it, especially being this close to seven and having a shot to tie those guys."