“It’s just a huge testament to our guys. This is the same exact car we had at Talladega a couple months ago. We didn’t really do that well with it. We had a great finish with it just staying smart and clean and staying out of the wrecks and stuff, but we qualified 38th or something like that. Every spare moment that these guys have had, which isn’t a lot because it’s kind of a bare bones crew here, they’ve been massaging on this car and doing what they can to make the most of it. Boy, this was good. We felt pretty good yesterday when we did our mock run, but we weren’t exactly sure where we lined up, obviously because everybody else was bump drafting out there, and we were optimistic about maybe a top 20, but to come out of here with seventh is pretty amazing, so it’s awesome for our Interstate Moving Services Ford and a great testament for all the great work that our guys have been doing at TRG Motorsports as well as in conjunction with Roush.” 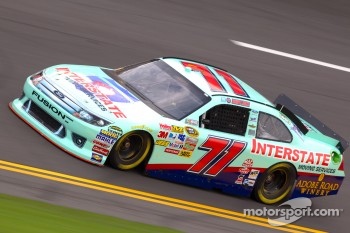 DO YOU FEEL LIKE YOU HAVE SOMEONE TO WORK WITH TOMORROW? “I was having a funny conversation yesterday and I was relating it to when I was coming up the road racing ranks and getting opportunities here and there. There’s a time you go through as a young driver where you get onto what everybody will call a short list of an opportunity to get to race with somebody and I think I’m building up on the guys’ short list that want to bump draft me, but I’m not at the peak of the list. I’ve made a couple friends this weekend. We had one coming into this weekend that we’re planning on working with and then right after qualifying, and that went well, we made one more so for the first time I’ll actually have more than one radio frequency plugged into my radio and we’ll see if we can make it work. To be honest, looking at how Daytona went and looking at how Talladega went, if you just sit here and live through the first 95 percent of this race, you can hang back with one good, smart partner and push and as long as you get a whiff of the draft up there, you’re not gonna go a lap down. If you can do that, you can come out of here with a pretty good finish.”

WHAT DOES THIS MEAN TO YOU AS A DRIVER TO QUALIFY SO WELL? “As a driver on the personal level it’s a huge positive, it’s a huge shot in the arm, it’s a huge encouragement coming from the team that we’ve got good equipment here. As far as did Andy put it seventh? No. I just stood on the gas and tried to stay as close to the yellow line as I could, and my guys gave me a fast piece. I don’t want to take any credit for putting the thing up as high as it is. I was just fortunate to get behind the wheel of a good car here this week, and at Daytona and Talladega that’s what is. But as far as what it does for me mentally as building up confidence knowing that we’ve got a good piece here, we were pretty decent in the draft at Talladega and knowing that we’ve improved a little bit on that, it certainly will be nice if we can hang around on this thing and stay on the lead lap until we get close to the finish. I think we’re gonna have a strong enough car that, one, will be able to get us to the front and, two, will have a little more encouragement from other teams and other drivers that will want to get with us to help us get to the front, so that’s a positive for sure.”

WOULD YOU LIKE TO WORK WITH TREVOR? “I’d love to, for sure. A good kid like that, as young as he is, and as new as he is to Sprint Cup racing, he’s obviously learned a lot and does a really good job and is composed for his age – for anybody’s age really. You guys have been interviewing him and talking to him and watching him drive for a long time now. He’s an obvious future superstar or current superstar for that matter, so, yeah, I would love to get with him – any of the Roush guys. Actually, a lot of guys in this whole garage, whether it’s the Roush guys or guys outside of that camp, have been very nice to me and welcoming, but it’s just a whole matter of when you get out there and you’re doing 200 miles an hour and you’re pushing and shoving your way out there, are you gonna go with a guy you met six months ago or are you gonna go with a guy that you’ve been a teammate with or friend with for five, 10, 15 years? So I’m trying to build that enthusiasm and confidence up in them to believe in me.”

WHO ARE YOU GOING TO WORK WITH TOMORROW AND IS THIS PLACE MORE SPECIAL THAN OTHERS WITH YOUR ROAD RACING BACKGROUND? “Daytona is hands-down my most special place as far as a race track goes. Having come here with the desire as a young kid to not only race in the Daytona 500 but then as my sports car career advanced, racing and winning the 24 Hours of Daytona, this has become the mecca for me. I’ve got Watkins Glen, which is a close second because I’m from New York, but this is hallowed ground here for me. Coming here, even though this isn’t so much driver talent getting up in seventh, this is just a cool little feather in the cap that a small team has come up here and done this. That’s pretty neat. A year ago today I was sitting up here. We won the Rolex race that was in conjunction. I’ve been doing this for almost 10 years with the July Daytona race, so it’s pretty cool. Daytona is incredible. As far as my drafting partner, that’s actually another really cool one there. Just coming here we started talking to Tommy Baldwin and Geoff getting in the race here in the 35. Geoff Bodine and Davey Allison were one of my two first heroes that I connected with because Geoff is from New York, so to have a chance to race with him and hook up with him, I think, will be pretty cool.”

HOW IMPORTANT IS YOUR SPORTS CAR EXPERIENCE? DOES IT HELP? “Only if you guys were letting us race in the rain. If we were going green whether it was rain or shine it would, but it’s actually something I’ve asked Kevin to completely relieve me of my duties this year. We have a July 24th event, the next and last open weekend before the end of the season here where there’s a Rolex race at New Jersey Motorsports Park and I actually asked him not to do that. It’s such a different feel mainly because of the tire. I’ve expressed that a lot in the past before, it’s not so much the engine is in the rear or that it’s a shorter wheel base or a higher downforce, it’s the tire is so different. We run a really low profile tire in the Rolex Series and we run a really high profile tire in comparison in the Cup Series here. Trying to get that feel in your head as that tire takes a set into the turn is big, and you guys know more than anything here that especially being a go or go-homer, every thousandth of a second counts here and I need to be focused on this, so as much as I love the Rolex stuff, I need to just focus on this. Yeah, I almost want to remove that from my head. That’s as far as driving fast. As far as racing experience and the ability to maybe calm down a little bit in the high pressure situations, it hugely helps because I’ve kind of been there and done that in high-pressure situations. It’s not obviously the Daytona 500 or the Coke Zero 400, but it’s still a pressure situation where you’ve got to kind of relax on the steering wheel, take a deep breath, tell yourself, ‘Hey, it’s just another day,’ and get at it.”