Austin Dillon the first playoff driver out in "crazy race" 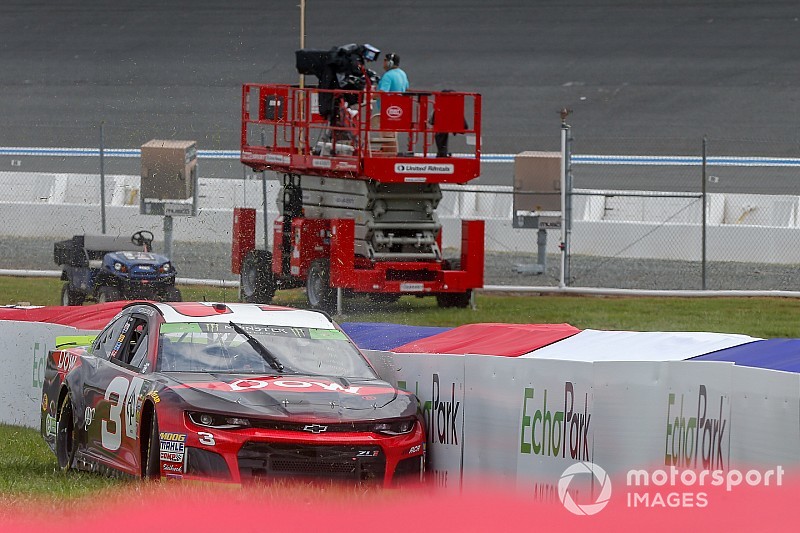 Austin Dillon suffered terminal damage to his No. 3 Chevrolet Camaro in Sunday’s Bank of America 400 at the Charlotte Motor Speedway Roval - an accident that also knocked the third-generation driver out of the 2018 NASCAR playoffs.

After he made contact with the wall trying to avoid a slowing Chris Buescher on the track, Dillon later cut a tire on Lap 65 of 109, sending him into the wall and causing the major damage to his car.

“This is a crazy race,” said Dillon after emerging from the infield care center. “I was having a good run and the No. 37 (Chris Buescher), I went through (Turns) 3 and 4 and I knew I didn’t even make a mistake and I didn’t think that was how I was going to make a mistake.

“He flicked the wheel right in the middle of the corner, and when he did, I checked (up) and smacked the outside wall and just couldn’t save it, there. And, we fixed it.”

Although his car was wounded after the incident, it was something else that caused his cut tire a few laps later in the 109-lap event, ending his day and title hopes.

“I came back up through there and jumped the curb and I think that’s what cut my tire down going into (Turns) 3 and 4,” said Dillon. “I should have just been more patient and waited for more attrition to go out. But I actually felt pretty comfortable and running good.

“It’s just hard to hold back in a treacherous race; and I guess I didn’t do what we needed to do.”

Johnson and Truex crash; Blaney wins in wild finish at the Roval