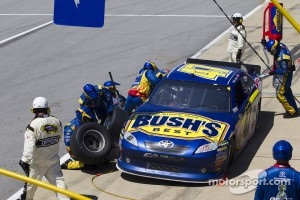 “Kansas has been tough on me, but it is a place on the schedule that I really like,” said Labonte.

The objective on Sunday is to top his best finish during the Hollywood Casino 400 with his No. 47 Bush’s Beans Toyota Camry fielded by JTG Daugherty Racing.

Labonte looks to supersede 17th-place, which occurred both with Joe Gibbs Racing and Petty Enterprises. In five of 11 starts at Kansas Speedway, he was taken out of contention due to accidents and one for mechanical woes. His most recent finish in June was 28th related to handling problems.

“A top-10 finish at Kansas Speedway, would be a good day for us,” Labonte said. “We want to do well. I like the place because it has multiple grooves and it is fan-friendly.”

As the season winds down and seven races remain, Labonte is busy as ever in preparation for the 2012 NASCAR Sprint Cup Series season. No official announcement has been made about the future of the team or Labonte’s plans, but he believes it is forthcoming.

“There’s a lot out there being talked about and hopefully we’ll know our next step in a couple weeks,” Labonte said. “I’ve had great talks with Tad (Geschickter) about us moving towards next year together even though there’s not a dotted line signed.”

Regardless, Labonte has enjoyed his relationship with his team, sponsors and manufacturer.

“Toyota has been awesome to work with and this was my first year with them,” Labonte said. “I appreciate what they have done. At the same time, our affiliation with MWR (Michael Waltrip Racing) has been good too. I know Tad, Brad (Daugherty) and Jodi (Geschickter) have had an affiliation with them for nearly three years and they are trying to figure it all out. There are a lot of things in process that we can’t talk about that will make our team better. I know the direction Tad, Brad and Jodi are heading and when it comes to fruition, we’ll make an announcement. Right now, were trying to finish out the season strong.”

Reviewing the most recent quarter, the team is improving according to Labonte.

“The last third has been better,” Labonte said. “We’re not up in points where we want to be, but we are improving. We’ve just had some bad luck that’s hurt our results. For example, we were going to have a respectable finish at Bristol Motor Speedway and then we had an electrical problem. We qualified 11th at Chicagoland Speedway and then we had an issue and got behind trying to play catch up. We finished 19th at Loudon (New Hampshire Motor Speedway). All in all, everybody is working really hard. It takes a lot to get to 15th when you are running 20th or 25th. The competition is so great. Our guys are doing well and we’re making improvements and that’s what’s important.”

Speaking of Labonte’s team members, two of them have been nominated by Mechanix Wear in their search for 20 all-time best crew members of the past 20 years of innovation in NASCAR. JTG Daugherty Racing’s pit coach Gary Smith and car chief Raymond Fox have both been nominated by people in the industry for the honor. Each honoree will receive an exclusive Mechanix Wear trophy recognizing their accomplishments.

“It’s nice to be recognized by a group of your peers,” Smith said. “There are a lot of guys on that list that I personally pitted against and worked with over the years when I was pitting a race car. Raymond Fox was one of those guys I competed against for many years when he was changing tires for Davey Allison. The guys on the list are the ones you would stand up next to in the pits and try to beat them off pit road every week.

“I spent 11 years at Hendrick Motorsports pitting the No. 5 car with drivers Ricky Rudd and Terry Labonte and I was fortunate to be with Terry when he won the championship in 1996,” continued Smith. “It’s kind of ironic that I spent close to five years with Terry and now I am able to work with Bobby. It’s nice that I have had the opportunity to work with both brothers.”

Ragan and Blickensderfer have clicked in first year together