Labonte Races for the First Time at Kentucky Speedway in No. 47 COTTONELLE® Clean Care Toyota

Bobby Labonte embarks upon his first race ever at Kentucky Speedway as the NASCAR Sprint Cup Series visits the 1.5-mile D-shaped oval for the inaugural Quaker State 400 Saturday night. 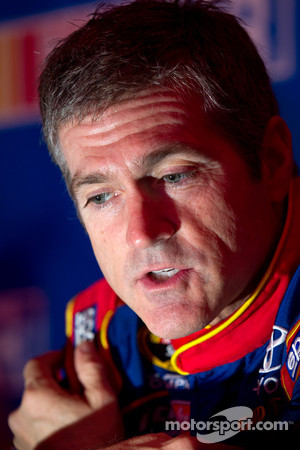 Labonte has 635 starts in the NASCAR Sprint Cup Series, 202 in the Nationwide Series and 10 in the Camping World Truck Series, but ironically has never raced at the speedway. Fortunately for him and his JTG Daugherty Racing team, NASCAR is allowing teams two test sessions on Thursday to become acclimated to the track that was opened in 2000.

“It’s good that we have a full day of testing and I’m really looking forward to racing at Kentucky Speedway,” Labonte said. “Believe it or not in all my years racing, I’ve never raced at Kentucky. I’ve only tested there. It is such a great facility and I cannot wait to see everything they have done in preparation to host their first NASCAR Sprint Cup Series race.”

“We do not test very much,” crew chief Frank Kerr added. “We have a huge test plan to try a bunch of things to find what Bobby wants to feel in the car. Our mile-and-a-half program has been up and down this season and testing will help us find what suits Bobby’s driving style.”

This weekend Labonte is carrying Kimberly-Clark Corporation COTTONELLE® Clean Care on his No. 47 Toyota Camry. For more than a century, Kimberly-Clark has transformed ideas into innovative products leading the world in providing essentials for a better life - and their global brands are a trusted part of the lives of nearly 1.3 billion people across more than 150 countries.

“My family uses Kimberly-Clark Corporation brands throughout our home and this weekend JTG Daugherty Racing is carrying COTTONELLE® Clean Care on the hood of the No. 47 Toyota, which is 30% stronger,” Labonte said. “It’s one of many exceptional brands that Kimberly-Clark has in their stable.”

While it is a big weekend for Kimberly-Clark Corporation, it is a homecoming of sorts for Labonte’s spotter and his former driver David Green that hails from Owensboro, Kentucky. When Bobby Labonte stepped out of his NASCAR Nationwide Series ride to go Cup racing, he hand selected Green to fill his shoes full-time during the 1993 season. Green did not disappoint and the next year he was hoisting the NASCAR Nationwide Series championship trophy.

“Bobby and I had built a relationship as competitors against one another and we were building cars for him and Terry before I went to work for him as an employee,” said Green, who has a total of nine Nationwide Series victories and also competed in 78 NASCAR Sprint Cup Series and 11 Camping World Series Truck events. “He’s the one who provoked me to move to North Carolina. In 1992, I worked for him in the shop and spotted. He knew I wanted to drive and at the same time he always told me that if someone offered me something that we would talk and go from there. I would come to him and he would say, ‘Well, I don’t know that will be a good deal.’ Then I had a shot at running ARCA and I won the Nashville race.

“Little did I know, Bobby was working on having me drive for him in the Nationwide Series,” continued Green. “Bobby’s very smooth. When he announced he was going Cup racing, we had a meeting with his sponsor Slim Jim and I was wondering what it was all about. In the meeting, the executive said ‘Hey Bobby, How about having David drive for us.’ And to think, I thought I was just tagging along that day.”