Will Brad Keselowski be a next-generation NASCAR Cup owner? 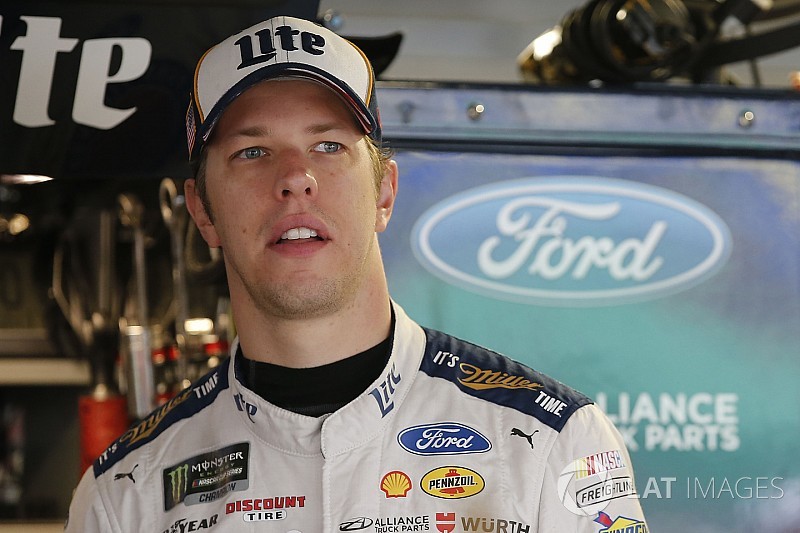 While both Ford drivers have been tabbed to drive the No. 60 Roush Fenway Racing Mustang in 2018, the fellow freshman truckers received a more tangible show of appreciation for their efforts this season.

Although Brad Keselowski elected to shutter his racing operation following the 2017 Camping World Truck Series season, on Friday he gifted each driver with the F150s from their respective inaugural wins.

Needless to say, Briscoe and Cindric were blown away by the gesture.

Hopefully, Keselowski’s hiatus from team ownership is temporary. Like his mentor Dale Earnhardt Jr., Keselowski provided an opportunity for a number of drivers to hone their skills in NASCAR’s feeder series before moving on to the next level. Ryan Blaney, Daniel Hemric, Tyler Reddick and now Briscoe and Cindric have all come through BKR.

And with ever-aging ownership in the Monster Energy Cup Series, NASCAR needs to cultivate its next generation of team owners. Just looking at the Championship 4, Barney Visser, who owns Furniture Row Racing, is in his mid-60s. Gene Haas, the principal owner of Stewart-Haas Racing, turned 65 last month. Joe Gibbs turned 77 last week, and Keselowski’s owner, Roger Penske, celebrated his 80th birthday in February.

Earnhardt has built a solid foundation at JRM and has provided a path for Keselowski and recent Hendrick recruits Chase Elliott and William Byron. Kyle Busch Motorsports has been a conduit for Toyota Racing Development drivers, including Byron, Daniel Suarez, Erik Jones and, most recently, Christopher Bell.

Keselowski’s foray into the cultivation of aspiring talent full-time started with Parker Kligerman in 2011. While he was only able to keep the operation afloat for seven seasons, it remains Keselowski’s dream to revive BKR one day and perhaps have the organization blossom into a NASCAR Cup operation.

“Absolutely. It’s 100 percent my dream,” Keselowski told Motorsport.com. “There’s a lot of things that have to happen to make that a possibility—including the support of a manufacturer and the health of the sport being at a high point. But it’s my intention to get to that position in the long-term future.”

Keselowski grew up in a blue collar racing family. The experience provided the third-generation racer with an education that would carry him through the racing ranks and eventually to Team Penske, where he won the Xfinity title in 2010 and the NASCAR Cup championship in 2012.

Over the last seven seasons, Keselowski, 33, evolved into a dynamic owner. Along with a comprehension of grassroots racing from his family’s team, he absorbed the polish provided from spending the last eight seasons with The Captain.

“I have a little bit of both,” Keselowski said. “I have a mix of the family feel, and a mix of the high-professional feel that Roger brings—which is a good balance. I feel I have a lot of driving days left in front of me. I want to make the most of this incredible opportunity I have at Penske.

“But when that opportunity runs out, which it will, I’m not infallible and I’m not going to live forever, racing is what I know. It’s what I love. I want to be involved in it some way. It makes the most sense to me for that to be in some kind of ownership capacity where I can make the most of my skill set as a leader of a team.”

Veteran crew chief Buddy Sisco, who led Briscoe to his first-career truck win in the season finale at Homestead-Miami Speedway on November 17, described Keselowski as the best owner he had ever worked for, simply because his boss was a racer.

“The best thing you can say about Brad is he was raised in a racing family,” Sisco told motorsport.com. “He understands the business from the bottom to the top. He understands sacrifice and the whole deal. When we first started, we didn’t really have a nice place to work, but we managed to win out of it and so he went out and made an investment in a really nice shop for us.

“He does everything first class. He raises the bar. He made every other truck team better because he made his team better. I’ve worked for a lot of owners over the years. If he called me back in four or five years, I’d be the first guy on the doorstep wanting to go to work for him.”

Keselowski, who finished fourth in the 2017 Monster Energy Cup Series standings, signed a three-year extension this summer to continue racing the No. 2 Team Penske Ford.

Currently, Keselowski has no intentions of selling the BKR building. It is indeed his hope to return to an ownership role when he hangs up his helmet for the last time.

“It’s going to be up to my generation as not just only as owners or pit crew members or drivers but also fans to take this sport to the next generation as it has been handed to us,” Keselowski said.

Truex Jr. thrilled to carry on the legacy of The Champion's Journal