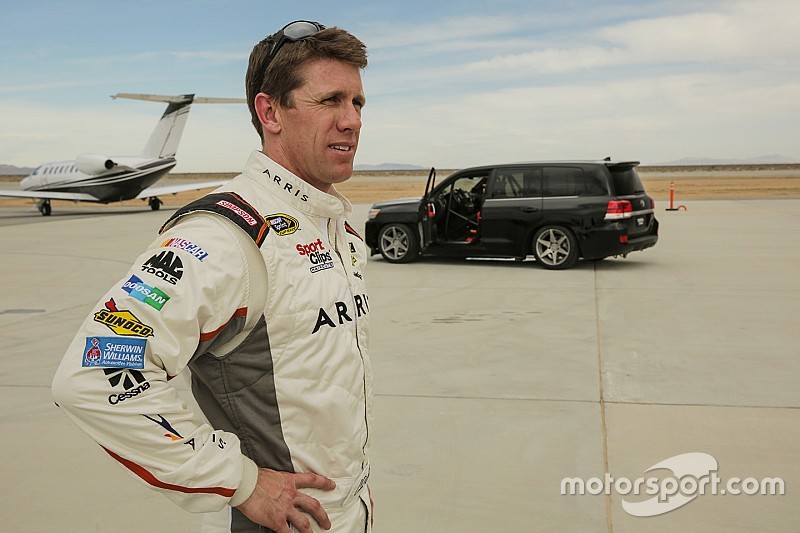 Cue up the yacht rock radio, Carl Edwards has checked out.

The former driver of the No. 19 Joe Gibbs Racing Toyots returned to the track at Sonoma Raceway on Saturday. But racing is the furthest thing from his mind.

“I’ve been talking to a lot of people and weighing my options — just kidding,” Edwards said. “I haven’t talked to anyone and I haven’t even considered coming back. Not right now.

“I think it’s pretty clear that if I really want to do something, then I would do it. But as I said in January, I would talk to Coach (Joe Gibbs) first, and I haven’t had any conversations about that.”

Edwards has moved on with his life — and away from the grind. He’s “happier and more content” than when he last showed up at the track when the Monster Energy Cup tour was at Atlanta Motor Speedway in March. And didn’t even bother making an appearance when the series rolled into Kansas Speedway — his home track.

“I’m enjoying life and it’s good,” Edwards said. “I’ve been having a lot of fun. I spent a lot of time in the New Holland — for about a month.”

After spending a month on his farm in Columbia, Missouri, and “getting the crops in the ground” Edwards sights are set on travel, something he had no time for when he was racing full-time.

Edwards latest passion is sailing. Following a trip to the Virgin Islands, he attended sailing school in South Florida. Prior to coming to Sonoma, Edwards was surfing in Maui, his first vacation to Hawaii that didn’t involve a sponsor or sport promotion.

“Now I have to figure out how to get a boat,” Edwards said. “That’s on my list of stuff. Sailing is pretty cool. It’s neat to get the chance to do some of this stuff.”

The avid pilot also hooked up with Cessna to fly around the country. But as for the actual racing end of his former job, the only thing he really misses is the people. He doesn’t watch TV, hasn’t watched racing.

While the challenge of qualifying a car on the 1.99-mile road course was appealing to the adrenaline junky — and still calls Sonoma “a special place,” Edwards has other things to consume him since his sabbatical from Joe Gibbs Racing.

“There are good things and there are bad but the good for me far outweighs the bad,” Edwards’ said of his retirement. “I’m super appreciative to get the opportunity to do the things I’m doing now and enjoy life.

“I wrote Joe Gibbs a letter the other day just thanking him for the opportunity to do the racing was huge — and then the opportunity to step away. I think Dale (Earnhardt) Jr. said it best when he said, ‘on his terms’. To be able to do that is just a blessing. I was just real appreciative.”