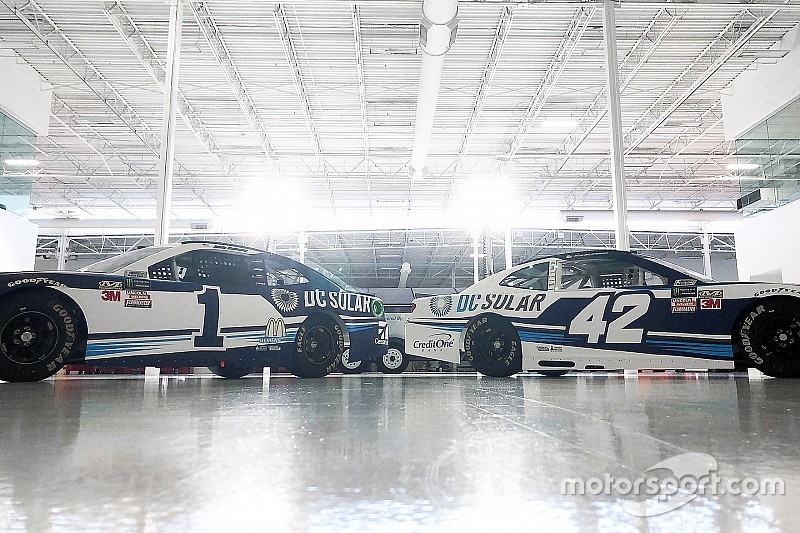 After three successful seasons in NASCAR’s Xfinity Series, DC Solar will move up to the Cup Series on the Nos. 1 and 42 Chevrolets in 2018.

“It’s fun to have the passion, but you have to have business results as well,” said Alex McGhee, DC Solar’s VP of Marketing & Business Development. “We have to match that to the investment we’re making. The passion part makes it fun. Certainly, it’s a leap of faith a little bit just making sure you can create the success you’re looking to have. But at the same time, I think that’s what we’ve been able to do over the last three years, kind of gotten our feet wet and grown each year a little bit each year in understanding the places we could go and the abilities we have to create success for ourselves within the team, within the tracks and everywhere else.

“That married with that passion allows you some comfortability in kind of making that leap. I’m excited to see all of the things we can do with this and the doors it opens.”

McMurray, a 15-year Cup veteran, qualified for his third-consecutive playoff berth. The 41-year-old Joplin, Mo.-native has seven-career Cup wins including the Daytona 500 and the Brickyard 400. His first Cup win came in just his second start while subbing for Sterling Marlin at Charlotte Motor Speedway in 2002. He'll have sponsorship from DC Solar in three to four races this season.

Chip Ganassi Racing has competed for over 30 seasons. Ganassi is celebrating his 18th season in NASCAR. His teams have won 18 championships between IndyCar, IMSA and the World Endurance Championship. CGR teams have compiled 199 victories, including four Indianapolis 500s, a Daytona 500, a Brickyard 400, seven Rolex 24 At Daytonas, the 12 Hours of Sebring and the 24 Hours of Le Mans.

DC Solar was founded in 2008. The Benicia, Ca., company provides mobile energy for businesses and consumers throughout the country. DC Solar is committed to developing “economically and environmentally sensible solar alternatives for off-grid needs.”

DC Solar will continue to sponsor both drivers for a limited schedule in the Xfinity Series. They will also serve as an associate sponsor for Scott Dixon and Ed Jones in IndyCar