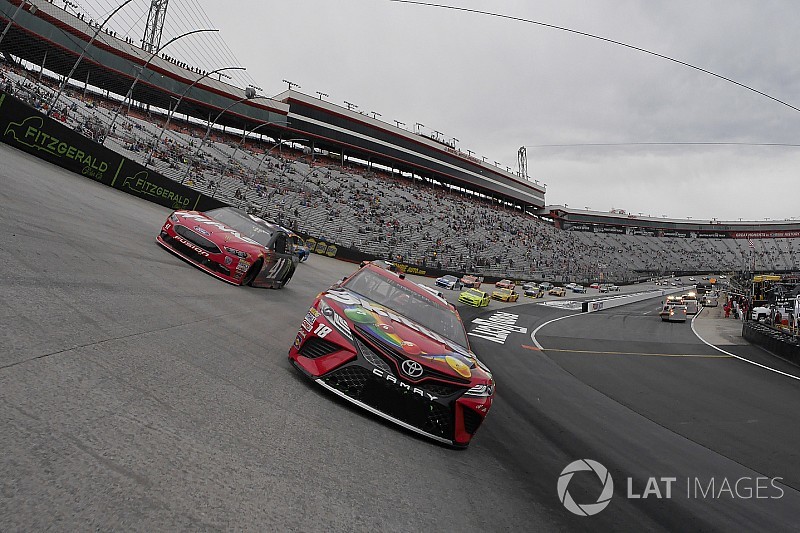 Kyle Larson leads the way at Bristol after 204 laps of racing, but the race will not finish today.

Larson holds the lead after the third and final rain delay forced the remainder of Sunday’s Food City 500 at Bristol (Tenn.) Motor Speedway to be postponed until 1 p.m. ET Monday (Fox).

The race was a stop-and-go affair from the start with 10 cautions and four red-flags (three for weather) before finally being halted for good after 204 of the scheduled 500 laps.

Since the race did not complete its first two stages - Stage 2 ended after Lap 250 - it was not an official event.

Larson took command following the break between Stages 1 and 2 and moved out to a sizable lead over Kurt Busch early in Stage 2.

On Lap 156, Trevor Bayne, running 25th and the last car on the lead lap, spun off of Turn 4 to bring out a caution.

Many of the lead-lap cars elected to pit under the caution but Larson remained on the track and in the lead. Darrell Wallace Jr., who also decided to make a stop under the caution, was penalized during the stops for speeding on pit road.

Before the race could resume, more rain wet the track and brought out another red flag – the second of the race for moisture at that time.

Larson was leading the race at the time of the red flag which stopped the race for 26 minutes, 54 seconds.

The race resumed on Lap 169 with Larson pulling away in the lead with Paul Menard and Joey Logano racing side by side for the second for the next few laps.

As Menard and Logano raced side-by-side, Larson pulled out to a lead of nearly five seconds.

Denny Hamlin passed Menard to move up to second by Lap 184, while Kurt Busch was forced to pit under green on the same lap for a loose wheel while he was running in the top 10.

The caution flag was given again for rain falling on the backstretch on Lap 201 with Larson leading Hamlin by five seconds. Menard was third with Kyle Busch and Ricky Stenhouse Jr. completing the top five.

The fourth red flag of the day was given for rain on Lap 204 with the rest of the top 10: Logano, Daniel Suarez, Jimmie Johnson, Kevin Harvick and Austin Dillon.

"It’s hard to get a rhythm with all the rain and stuff and then getting out of your car and getting back in.  Our McDonald’s Chevy is really fast, I would just like to get some racing going, but then again, I feel like I always do better or do worse once the track gets a bunch of rubber on it," Larson said.

"So, if we keep getting all these stops and jet dryers and stuff to take the rubber off the track, maybe it will help us out," said Larson. "But, feeling good about it so far.”

Asked about Sunday's track conditions with the weather, Larson said, "It’s been really slick everywhere really. There is only a little line there on the bottom that has got some grip. If you get out of it, it’s slick, if you get below it, it’s slick.

"So, it’s been fun, but it’s kind of hard to guess where you need to position your car there for a little while.”

The race will resume on Monday where it left off.