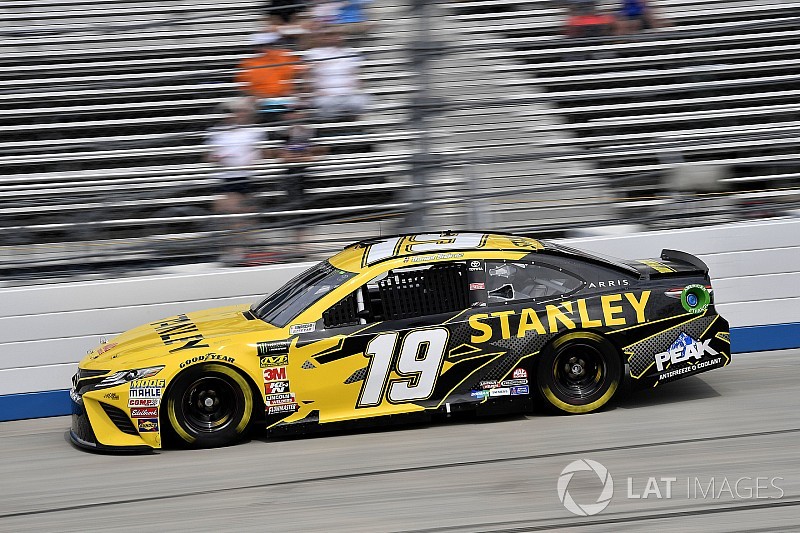 Daniel Suarez finished third for the second time in his Monster Energy NASCAR Cup Series career as he continues to get closer to his first win in NASCAR’s top division.

The Monterrey, Mexico native ran strong throughout Sunday’s AAA 400 at Dover (Del.) International Speedway and brought his Joe Gibbs Racing No. 19 Toyota home with a podium finish for the first time on an oval - his third consecutive top-10 finish in the Cup Series.

His previous best finish on an oval was sixth and his previous third-place finish came last season on the road course at Watkins Glen (N.Y.) International.

“We had a rough first month and half of the season but we’ve been moving in the right directly lately,” said Suarez. “I feel like if we keep running the way that we're running today, top-five, top 10 pretty much all day long we were running in the top 10, I think it (a win) can happen any time.

“The 4 car (Kevin Harvick) was in a different league. Normally if you can run in the top-five, you can have a shot any time (with) those crazy restarts and stuff. Like I said, overall very proud of my team.

“I feel like we are moving in the right direction. We just have to keep it up.”

Suarez is no stranger to success at Dover scoring a win in an Xfinity Series race in six starts and scoring two top-five finishes in as many Truck Series starts.

“I like this place a lot of how everything changes,” said Suarez. “As a driver it makes it a lot of fun how you have to adapt to the situation (during the race).”

Suarez was able to adapt all race long and felt his car was at its best near the end of the race which including a 41-minute red flag for rain in the final 100 laps.

“I think actually by the end of the race,” Suarez said. “I felt like we ‑ right there at the end for sure we had a top‑five car. Actually just like Clint (Bowyer) mentioned, when you're in the front, the car just came alive, for whatever reason.

“A lot of clean air and clean race track, and the car is just faster. I was running most of the day between sometimes in the top-five, in the top-10 all day long, and the car was strong running there, just going away a little bit too soon. My short‑run speed wasn't great. But once I was in the front, I was able to overcome that with clean air.”

Suarez added he feels he’s improving each week and able to learn from his teammates at Joe Gibbs Racing.

Is Jimmie Johnson's Dover finish an ominous sign for Chevy?