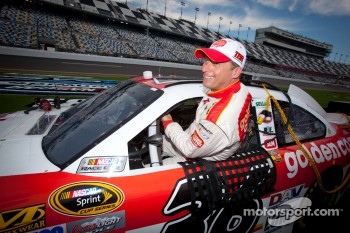 TBR AT NEW HAMPSHIRE – TBR made four starts at NHMS in two years. Casey Mears drove to the team’s best start of 23rd and finish of 29th. Blaney drove the last start for TBR in the Fall 2010 race. He started 30th and finished 31st.

BLANEY AT NEW HAMPSHIRE – Blaney made 22 career starts at the mile track. The Hartford, Ohio native collected one pole, one top-10 and five top-15 finishes in his career. He won the pole in the summer of 2007 with TBR owner Tommy Baldwin as crew chief at Bill Davis. The pair also recorded Blaney’s best NHMS finish of ninth in the fall race in 2006. Blaney is ranked as the ninth best closer among current NSCS drivers at NHMS.

BALDWIN SUCCESS AT NEW HAMPSHIRE – NHMS is a special track for Baldwin. Baldwin began competing at the mile-track in the NASCAR Whelen Modified Tour (NWMT). He collected three wins in his career, two in the NWMT with Steve Park and Jeff Fuller and one in the NSCS in 2002 with Ward Burton.

Dave Blaney: ON RACING IN NEW HAMPSHIRE – “New Hampshire is definitely a unique racetrack. With the way it’s shaped, the track has some speed and high braking. It’s different than most other tracks. It’s more of a home track for Tommy, so he likes to run up there. We have big expectations. We have run well together in the past and the chassis we are bringing ran well on short tracks.”

Tommy Baldwin: ON THIS WEEKEND – “It’s good to be back in Modified land. We will have two development drivers competing in the Modified event, so I am excited to see that. I look forward to the Cup race as well. We have a good history at Loudon. We’re also bringing the Richmond car, so I’m excited to see what we can do."

Tony Stewart Looks For A Win In the Loudon 301