Contact between Joey Logano and Martin Truex Jr. in final turn at Martinsville opened door for Denny Hamlin to almost score his first win of season. 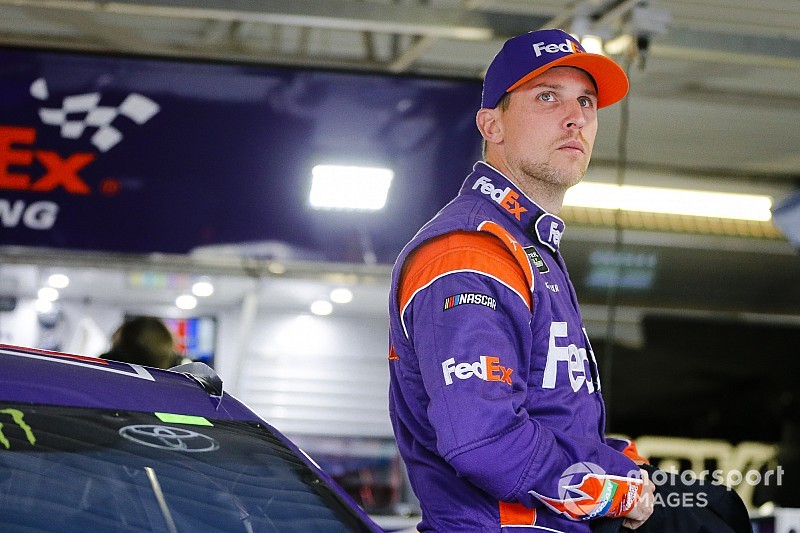 Hamlin was able to finish second after Logano bumped Truex in Turn 4 at Martinsville Speedway and for a brief moment thought he might be able to extend his 12-season streak with at least one win in the Monster Energy NASCAR Cup Series.

However, Hamlin said his best opportunity to race for the win disappeared because it took too long to get past his teammate Kyle Busch.

“It just took too long to get around (Busch) and (Brad Keselowski) there with about 10 to go. We just couldn’t capitalize on those guys getting into each other,” said Hamlin after the race. “(We had a) great long run car. Mike (Wheeler, crew chief) and the team just did a great job of giving me a car that was exceptional on the long run.”

Hamlin was finally able to get around them and had a front row view of the action between Logano and Truex on the final lap.

“I knew they were going to get into each other,” said Hamlin. “They were leaning on each other pretty good there for a couple laps. It seemed like whoever was on the outside could kind of pinch the inside guy off.

“I knew it was coming, but I just hoped it would be a little more dramatic.”

Although he’s not in the championship hunt, that didn’t diminish Hamlin’s desire to earn a win before the conclusion of the 2018 season.

“(I want a win) bad. I mean it’s as bad as I’ve wanted anything,” Hamlin said. “We’ll look ahead. We’ve got three good race tracks ahead of us and we’ll see if we can get it done.”

Roger Penske on Truex's criticism of Logano: "He should know better"

Earnhardt Jr: Truex was “too nice” in wild Martinsville finish