Are you looking forward to racing at Pocono to help your chances to get into the Chase? “Yeah, definitely. We’re in the spot now obviously where we feel like we would really like to have a second win to kind of lock ourselves in. We feel like it would be a safe assumption. But, we’ve got to get back to consistency as well so it’s a tough balance. Obviously, reliability has been a big issue with our stuff here lately so we’re just trying to work through all of that and get it better.”

What was going on with your car during the first practice? “We were hitting the race track extremely bad. Obviously, we had an issue here the last time we were here our car really gave up a lot of speed towards the end of the race so we were trying a new setup completely outside the box. But, we were hitting the race track so bad we couldn’t get it up off until right there towards the end.”

Did you go out when practice started? “Well, we did. We were running a couple laps -- well, we ran a lap, but never actually made a full lap on the race track, but we did run probably a lap and a half.” 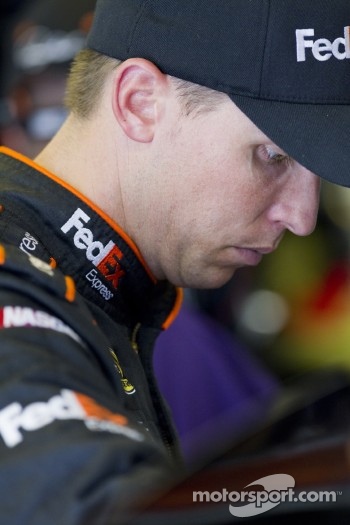 How concerned are you that your team is having reliability issues this far into the season? “It does make you concerned. The good news for us is we’ve got a lot of people at TRD (Toyota Racing Development) helping try to work through the issues. But, really at this point there’s not a whole lot I can do about it. Just kind of hope and pray that it holds together for us. I think that they’re making strides and trying to get better, and it’s not from a lack of effort by any means. Obviously, we need to lean on those guys at TRD to try to help us work through it because it looks like their engine program has gotten reliability kind of sorted out here in the last couple of years.”

Were you surprised with Carl Edwards decision? “Not really surprised. I talked to Joe (Gibbs) a little bit and he said that -- I asked -- you hear the rumors and you hear he is or he isn’t and I’m wondering really how close he is so I asked Coach (Gibbs) myself and he’s like ‘Trust me, if it ever got to that point I would let you know first.’ So, I knew that it never really had gotten very far along I don’t believe. Whether his intentions really were to leave or not it’s tough to say. Nobody knows but really him. For us, we were obviously interested in having him and things just didn’t work out.”

How much are you focused on the wild card battle? “Well, a little bit. The thing is and realistically is that David Ragan and Paul Menard and those guys -- they would have to leap frog over us in points to knock us thin out of the wild card unless they win another race. We are in a danger zone. We don’t want to be where we’re at, but we know we’re very capable of winning this race, the next race, the next race and the one after that. We’re not terribly alarmed, but obviously with the reliability issues and I hate to keep going back to that, but you never know what can happen. Those guys could gain 30 points on you just like that in one week and I don’t think that they’re that far behind. We’ve got a little assurance knowing that Michigan victory hopefully will keep us in.”

Do you think David Ragan and Paul Menard would like to see you back in the top-10 in points? “That’s just part of it and I was thinking that if I were them, I’d be confused as to whether I would be rooting for me or rooting against me. It’s so hard to figure out because you want me to get back in the top-10, but if I don’t, you want to pass me in points. You either want me to have really, really good days or really, really bad days. That’s pretty much what those guys are thinking I’m sure at this point.”

What about Pocono makes you so good at this race track? “It’s so tough to say and you try to put your finger on it and figure out why you’ve had so much success at one race track. I’ve been here with the old car, the new car, shifting, not shifting, spoiler, wing -- so many different changes and so I can’t really place why. It’s not like a magic setup that we have. We change every time we come here. I just think that it lends itself -- some race tracks just lend themselves to drivers’ styles better than others. Dover for Jimmie (Johnson) or Greg (Biffle) -- they just excel at those race tracks. I can’t finish on the lead lap there if my life depended on it. It’s just one of those things. It doesn’t reward the way I drive. This race track does.”

What did Sprint Cup drivers learn from Carl Edwards’s negotiation? “It’s tough -- I don’t know. It’s tough to say because obviously you’re in a power position -- I think he is. I think he’s a marketable guy. I think he’s obviously leading these points standings and that doesn’t hurt. Each person has their own worth. It’s just what is it. I think that we’ve kind of got an idea of what Carl’s (Edwards) was over these past few weeks."