HOW DID YOU OVERCOME THE ANKLE INJURY TODAY TO WIN? “It’s not me, its good people. It’s having a Paul Wolfe (crew chief) and a team that digs. There are so many people to thank for being in victory lane, from Miller Lite to Sprint to the fans. I’m no hero. The heroes are the guys that died in Afghanistan this weekend and I want to spend time thinking about them. They were my inspiration for this weekend and the things that those guys do. I’m glad that we could win today, but those are the heroes. I just drive race cars for a living.”

NOW YOU’RE ELIGIBLE TO WIN THE SPRINT SUMMER SHOWDOWN? “That’s pretty cool. I’d like to win that money, but I’d much rather get these guys in the Chase. I would throw away the money if I could promise them we’d be in the Chase and have a good run at the championship. Runs like this are great and show that we can do it. I’ve got a good teammate in Kurt, he helped me out. It takes people like that and people on this team working together. It’s really turned around Penske Racing. It’s made it something that I’m really proud to be a part of and I’m looking forward to years of success here.” 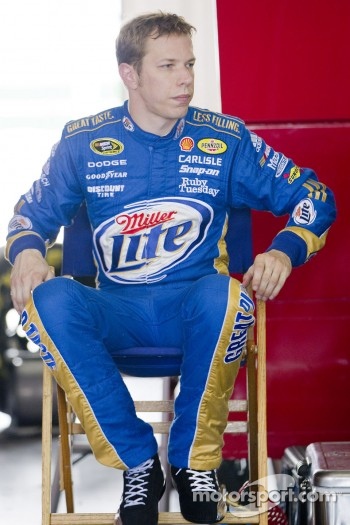 CAN YOU TALK ABOUT THOSE CLOSING LAPS? “You’re trying to fight yourself. We had a fast Miller Lite Dodge Charger today and I was really good coming off of Turn 3. Paul worked on this car and made it better all day. I knew that if we got out front on that last restart, we’d be tough to catch. I had a mirror full of the 18 car; our Dodge was just a little bit better today.”

(DURING RAIN DELAY) HOW WAS YOUR RUN TODAY? "It was pretty good. I'm a little tired in the car. That's alright. We'll keep fighting. We were able to drive up to eighth; that was pretty good. We have decent speed in the Miller Lite Dodge Charger. We pitted right before the yellow came out, so we're all curious to see...hopefully, we'll get back to green. If we do, that should cycle us out to the front and we're excited about that."

YOU SLID THROUGH YOUR PIT BOX EARLY IN THE RACE. HOW MUCH IS THAT BRACE THAT YOU'RE WEARING AFFECTING YOU INSIDE THE CAR? "It's a huge factor because you have to modulate the brakes as you come into your pit stall. You brake real hard and then you come off, and I can't just modulate them. Once they lock up, I just can't stop. I just slid through."

HOW IS THE PAIN? "It doesn’t feel good, but I'll be alright."

“We were fast on a fresh race track and then we’d fade. I was racing Jimmie (Johnson) hard there at the end. I was racing, flat out. You want to race, let’s race. I didn’t know we were supposed to pull over when it came down to five to go. I raced him hard. I raced him smart. I raced him clean and he wants to come over here and bitch about it. Hey, he came off the turn and did at jab to my left; I did a jab back to the right. Why can’t we race each other like this and put on show for the fans and not have a problem with it? I don’t know.”

YOU LED A LOT OF LAPS, IT LOOKS LIKE THE CAR WAS STRONGER THAN EVER AFTER THE RAIN DELAY. “Today was definitely a hard-fought battle. Early on, we were able to benefit from our good qualifying position and run up front, exchanged the lead back and forth with (Joey) Logano and (Denny) Hamlin. Running right there, third, fourth or fifth and just clicking away laps. We always start off good when the track is fresh and then we just started to slide more and more when the track rubbers-in.

“We were struggling; just kind of hanging on to a top-10 spot and the rain came. We pitted right before the rain. At the time, I thought my crew chief was crazy. That would have trapped us 26th if we didn’t get it back underway. But luckily we did. And it looked like the Penske guys were the smartest guys when it came to a rain delay, because we came out 1-2 after the restart.

“Our car just took off on fresh race track that wasn’t rubbered in, and then the race track rubbered up really quick those last 60, 70, 80 alps and we were hanging on to it in the end, brought it home third. A good hard-fought battle for us, rooting for those two in front of me, my teammate and my younger brother, to wreck each other, but not to wreck each other. Of course I wanted both of them to win and I wanted to win, anybody but the 48. And us three, we came home up front.”

“I had made up my mind that we were going to try and win the race, but we had to get our track position back. We lost it there on the two-tire call with us and the 20 car. The 20 retained track position, we didn’t. We had to do something and take a chance. I’ve been real conservative; don’t take a lot of chances I guess. I thought I could gamble on it and could live with the outcome. When it started raining, Paul (Wolfe, crew chief for Brad Keselowski) and I, both of us started yelling hit pit road. It was a gamble, but we thought the rain would stop and we could finish the race. It worked out for us. I’m glad for the whole Penske organization, two cars in the top three here at Pocono. From where we were last year to finish first and third here, we’ve come a long ways.”

(DURING RAIN DELAY) “There were three or four of us that put two (tires) on (during green flag cycle between laps 82 and 88) and the rest put four on. We got beat right there. The 20 car maintained track position, got out in front of us and was able to hold everybody off. Once we get back out there, we’ll be fine. We pitted and the caution came out for rain, so we’re OK. We’ll see how things shake out.”

“We had planned on racing the whole race. The ignition wire coming out of the fire wall to the engine came undone or it overheated the ignition boxes. It was probably the wire, because they wiggled it and got it to work. At the same time, we changed the ignition boxes. We went back out, but when you’re 20 laps down, it doesn’t make sense to keep running. We have a new Dodge Charger for Watkins Glen, a brand new race car. We’re looking forward to next week, just hope nothing falls off the car and we can run the whole race.”