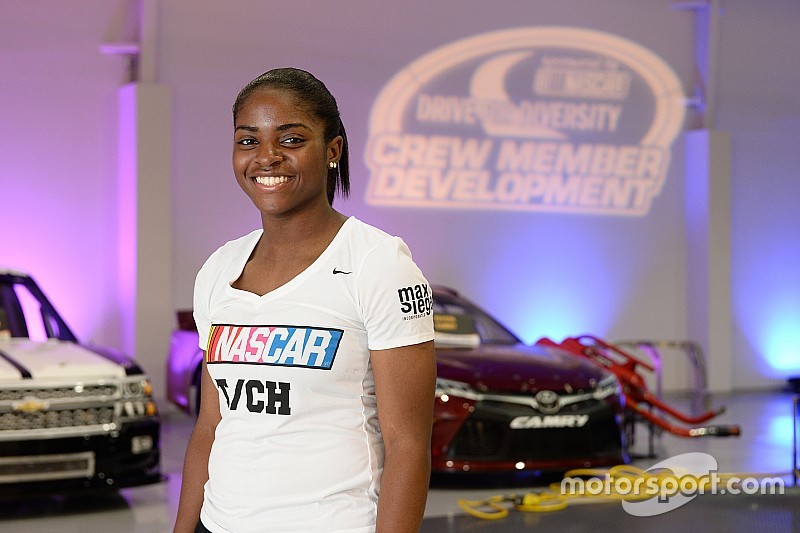 Tire-Changers Brehanna Daniels and Breanna O’Leary will both go over the wall on Saturday in the NASCAR Cup race to pit for driver Ray Black Jr.

For the first time in the history of the NASCAR Drive for Diversity program, two female drivers will pit a car in Saturday night’s Monster Energy NASCAR Cup Series race at Daytona International Speedway.

The crew members will both pit for Rick Ware Racing and Black, driver of the No. 51 Chevrolet Camaro ZL1.

Daniels has already pitted in more than 25 NASCAR national and ARCA series races since last season will be making her debut in the sport’s top series at Daytona.

The former Norfolk State University women’s basketball player is believed to be the first female African-American crew member to compete in a NASCAR national series event.

“It’s hard to believe I’ve only been changing tires for two years and now I’m here at the Monster Energy Series level,” said Daniels. “What I’m doing in NASCAR is so much bigger than me. It’s been so rewarding to be part of history while at the same time inspiring others to take on challenges they thought might not be possible.”

O’Leary will be making her third appearance in the Cup Series and second this season. She changed tires for the No. 51 car at Michigan International Speedway on June 10.

O’Leary and Daniels, who are roommates and share an apartment in Charlotte, N.C., are the fifth and sixth female Drive for Diversity crew members, respectively, to reach NASCAR’s highest level.

“The Monster Energy NASCAR Cup Series is unlike any other series,” said O’Leary. “There’s a certain energy and hustle and bustle – both in the garage and on pit road. But as a tire changer, the mindset is still the same. Five lug nuts on and five off.”

Both Daniels and O’Leary were recruited to the Drive for Diversity Pit Crew Development program in 2016 by longtime pit crew coach Phil Horton as part of a nationwide talent search conducted by NASCAR and Rev Racing, the program’s operational arm.

At the time, Daniels was preparing to graduate from Norfolk State and O’Leary was working in the strength and conditioning department at Alcorn State University after completing her career as an outfielder on the softball team.

The athletes now split their training during the week between Rev Racing and the Xcalibur Pit School in Mooresville, N.C., before traveling to join NASCAR national series teams on race weekends.

“We knew upon their arrival that Brehanna and Breanna had the potential to one day compete on pit road in our top series,” said Jusan Hamilton, NASCAR senior manager, racing operations and event management. “They’ve demonstrated the commitment, put in the work and earned the opportunity to go over the wall as teammates on NASCAR’s biggest stage – Daytona International Speedway.”

Daniels and O’Leary are among more than 50 graduates of the Drive for Diversity Pit Crew Development program currently working in the NASCAR industry. Twenty-five are pitting in the Cup Series.