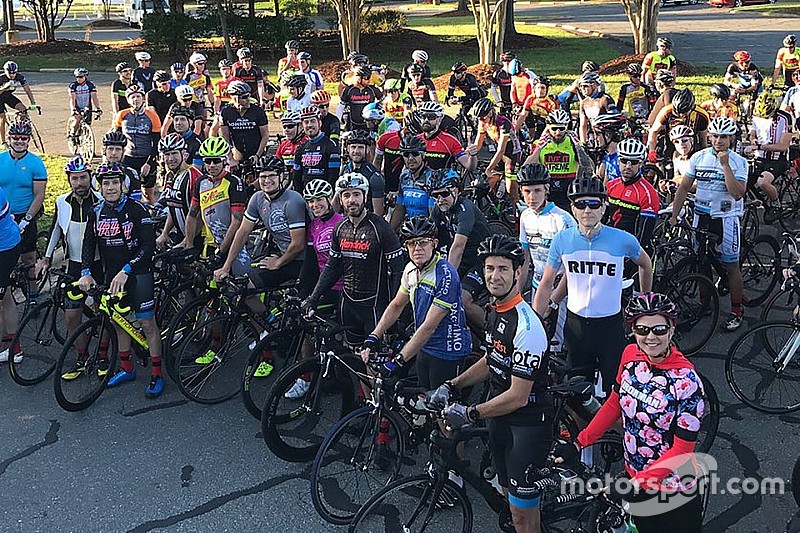 Hayden, 35, died Monday as a result of injuries sustained in a cycling accident on May 17 in Italy. He was struck by a passenger car while cycling in Rimini following the Imola World Superbike round.

Josh Strang, a Motocross rider and friend of seven-time Cup champion Jimmie Johnson, came up with the idea of cycling 69 miles this week in honor of Hayden, who raced predominantly with the No. 69.

“Josh is somebody who likes to do things on a small scale and I’m kind of the opposite,” Johnson told Motorsport.com. “He was thinking three or four guys and ride 69 miles and no one will know about it and it will just be something cool that we do.

“It just flipped something in my mind and I was like, ‘Let’s ride 69 miles and tell some people about it’ and that way we could spread the love about our friend Nicky and hopefully raise some awareness about cycling.

“It definitely snowballed and we had heavy, heavy support from the NASCAR garage area.”

“I think a lot of people in the cycling community just wanted to go out and ride and honor him,” Johnson said. “Nicky was so well known. It’s been amazing to see how many people from all walks of life knew ‘The Kentucky Kid’ and wanted to honor him and ride a bike.

“I feel like that since Nicky was someone who was representing our country abroad in racing overseas, a lot of us watch on TV, tune in and look for the American flag to see how he’s doing, that touched a lot of us.

“We don’t have a lot of (Americans) racing in other forms of motorsports out there and in MotoGP, Colin Edwards and Nicky Hayden – they’ve been our guys.”

The group launched from the Charlotte suburb of Mint Hill, N.C., early Saturday morning. Johnson completed 69.6 miles in three hours, 38 minutes and 29 seconds, burning over 1,800 calories in the process.

Hayden made 217 MotoGP starts between 2003 and 2016, beating Valentino Rossi to the 2006 World Championship in the fourth of his six seasons with the factory Honda team.

He moved to Ducati in 2009 and spent his final two full-time seasons with the Aspar Honda team before switching to the World Superbike Championship with the Japanese firm last year.