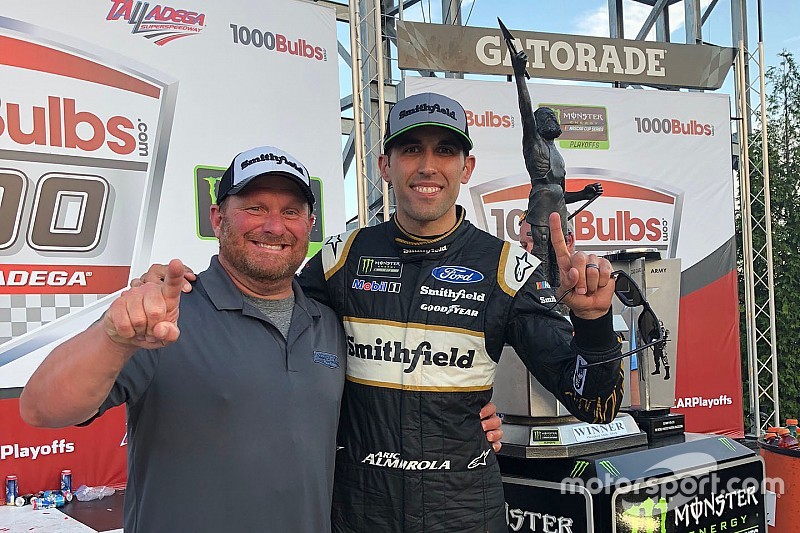 Edmonds, from Dobson, North Carolina, spends time on his 30-acre farm formerly owned by his grandparents in nearby Mt. Airy.

How did you get started in racing and how long have you been spotting?

In 1991 I started driving a show car and in 1992 worked for Alan Kulwicki and Jeff Gordon in 1993. In 1994 I worked as a mechanic and tire carrier for Greg Biffle. I started spotting for Scott Pruett in 1999 when I pulled a muscle in my back.

How did you team up with Aric Almirola and Stewart-Haas Racing?

I left Roush Fenway Racing in 2015 and started spotting for Brian Scott when he drove at Richard Petty Motorsports. When Brian quit racing I moved over to spotting Aric when he was driving the No. 43 car and when he moved over to Stewart Haas Racing I came with him.

I feel like we’re a lot like the crew chief in that we just want everything to go well during the race. Believe it or not, qualifying is one of the most challenging parts of the job. You have to work to make sure your driver has a good line to run. It seems like a lot of times drivers will go out at the same time in qualifying and you want to help you driver as much as you can.

Do you spot for anyone besides Aric during a race weekend?

I also spot for Chase Briscoe when he runs the No. 98 car. It was fun to be part of the team that featured the first winner on the ROVAL. If Kevin (Harvick) drives the 98 then I spot for Cole Custer and I also spot for Ryan Sieg at times as well.

How do you help keep your drivers calm during a race?

I just try to stay as calm as I can at all times. I feel if I’m calm when I talk to Aric or any driver then it helps them stay calm. Luckily for me Aric is one of the calmest drivers in NASCAR. Especially late in a race like at Dover, I try to keep telling him everything is going to be fine. I just feel like sounding calm on the radio keeps the driver calm and that’s the best thing I can do for him during the race.

I really like it when there’s chaos on the track and I’m able to help get him through it without making contact. I also try and see things as quick as I can. Like last year at Kansas when Aric had his accident and hurt himself. I saw the sparks before Aric got there but there was nothing he could do.

Do you feel your experience helps you as a spotter with Aric?

I think it’s harder to spot for a driver back in the pack than it is running up front. You have to spot differently and you also have to race differently. Spotting a driver in 30th-place is much harder as you have traffic in front and behind you where as up front you have a different set of issues to watch.

A lot of fans might not realize how tough it is to be on the roof for up to 12 hours on a race day with the heat and elements. We often join the drivers as the only ones who can’t use the bathroom during a race.

What was a moment you remember in the spotter’s stand?

I was working in the garage when Michael Waltrip had his memorable accident at Bristol hitting the wall at the old crossover gate. However, when Mike Harmon hit the same gate I was in the spotter’s stand and I just remember all of that when it happened. I was looking directly at him when it happened.