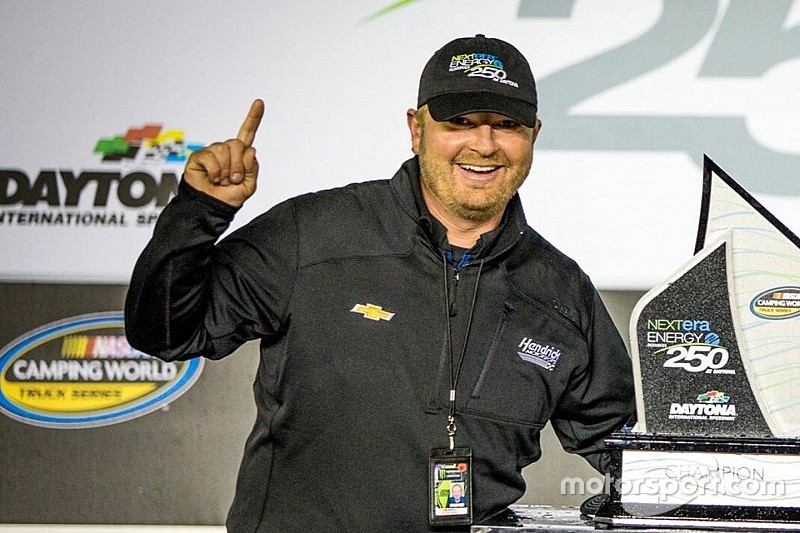 How long have you been spotting for Sauter and when did you start working with him?

This is my sixth season with Sauter as we started together at Daytona in 2013 and won our first race working together so that was pretty neat and special.

Do you spot for anyone else besides Sauter?

I used to spot for Joey Logano in NASCAR Cup Series races but I moved over to Hendrick Motorsports this season and spot for William Byron in Cup and I also spot for Alex Labbe in the NASCAR Xfinity Series.

I think people don't realize how far you are away from the cars or trucks you are at some of these tracks. You have to have a good pair of binoculars and an ability to see things well to help your driver. It can be very challenging at times when you are that far away.

How do you try and help your driver during the race? (Do you sometimes joke around to help calm them down when they need it? What is it they like to hear from you?)

We stay pretty focused and there's not much time for joking around during a race. As a spotter you are always trying to think ahead and figure out a strategy for the race so you have to always be aware of what is going on.

What’s the most rewarding part of your job for you? Do you still feel a sense of competition as a spotter?

For me it's the appreciation you earn by doing a good job for your driver and team. For me, it's not missing a critical call or helping a driver make a move during the race that helps you in the race.

I've raced a PASS-type Super Late Model before and I've also raced some in Ron Barfield's Street Stock Mid-Atlantic Series and when I race I try to remember what I went through as  a driver so I can relate to the driver. A good example of that is when you know your driver is battling a loose car during a pit stop run, you know not to guide him into a situation that's not good to do with a loose car and I think driving in a race helps a spotter relay that information better because they've also experienced it, too.

As you said, you also spot for rookies Byron and Labbe. What is that like for you versus dealing with an experienced driver like Sauter?

Well, it’s a neat opportunity to spot for William (Byron). William already has the speed like a veteran driver, what I'm trying to do now is figure what he needs to hear during a race to help him out. We had chatted some before this year but never worked together until the test earlier this year at Las Vegas and our first race together was in Daytona. It's also my first spotting for Alex (Labbe) and he has a lot of talent and learning quickly.