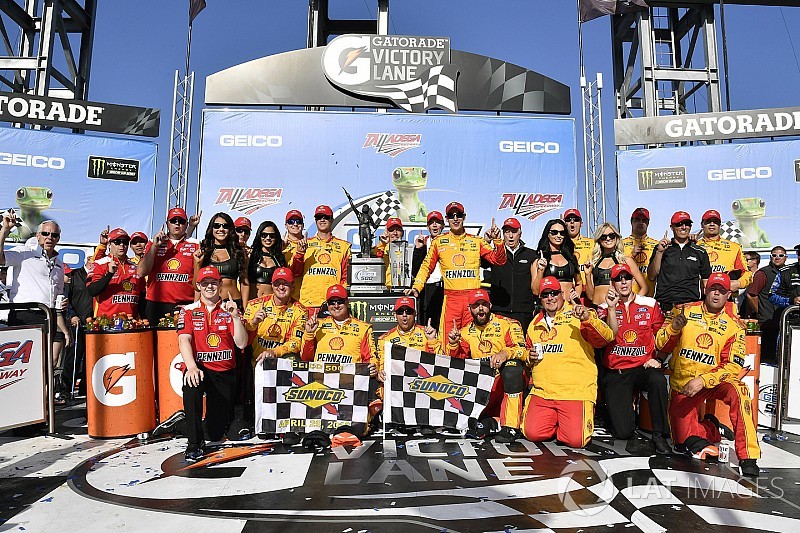 This week, Motorsport.com caught up with veteran spotter T.J. Majors, spots for Joey Logano in the Cup Series and rookie Dalton Sargeant in the CWTS.

Majors, who also used to race himself, worked as the spotter for Dale Earnhardt Jr. for over 15 years before Earnhardt retired at the end of last season, opening the door for Majors to join Logano in 2018.

How did it come about for you to spot with Logano and eventually Sargeant as well this season?

Well, after Dale retired last season, I got the call and Joey and I clicked really well when I spotted some for him when he drove Brad’s (Keselowski) truck in the past. I’ve always enjoyed working in the truck series and with young drivers. I feel like I can make more of a difference helping the younger drivers in the truck series and I enjoy working with Dalton.

What was it like to score your first win with Logano at Talladega?

Well, we felt going into the race that we were one of the cars to beat in that race because of our equipment and how good Joey races on restrictor plate tracks. We looked forward to Daytona and all the restrictor-plate tracks because we feel confident everytime we race there that we will have a chance to get a win.

How much do you enjoy working with Sargeant in the Truck series?

I enjoy helping him learn about the tracks he’s going to for the first time and he’s getting better every week. My goal is to help him and the team improve to the point that he’s running in the top five every race. If we can get to that point on a weekly basis, then the wins will come. Dalton’s crew chief Doug Randolph makes smarts calls and adjustments during a race and Dalton will keep improving the more experience he gets and I enjoy working with him every race.

What’s been the biggest difference working with new drivers this year since Dale Earnhardt Jr. retired?

One of the biggest changes is how much I talk on the radio now. With Dale he would like to concentrate on what he was doing and there would be times it was very quiet on the radio and that was his preference. Joey is different in that he wants as much information as you can give him during the race. Joey likes a lot of information about what is going on, lines people are running to find speed and whatever else he feels he can use to make a good decision while driving his car.

I would say the elements. The roof is a roof and either it’s hot or cold or windy or whatever. Also another challenging aspect is working a track or a road course where you can’t see your car all the time. A place like Indianapolis only allows you to see your car for about half a lap or so and the same thing on a road course a lot of times. I try to take good notes and prep for races by watching film on them to see if I can learn anything new to share with the drivers.

What’s the most rewarding part of your job as a spotter?

Well anyone will tell you winning is rewarding and that’s true, but I also think feeling appreciated and being part of the team means a lot, too. It also feels good knowing you have a part in helping keep your driver safe and if they win, that’s even better.

Absolutely. It helps me for sure. When I started spotting I had no formal training so I just told drivers what I thought I would say if I was driving. I knew what I was looking for when I was driving.

How did you get started as a spotter?

I was working at MB2 Racing and was asked to go with Joe (Nemechek) and then Boris Said when he also drove some races for the team. I also spotted for Scott Riggs and then Sterling Marlin some. I then moved on to JR Motorsports and spotted for Mark McFarland and Dale listened in and approached me about spotting for him. I started with Dale in his last 10 races at DEI and then moved with him when he started driving for Hendrick Motorsports.

Roundtable: Is Harvick the one to beat in NASCAR's All-Star Race?