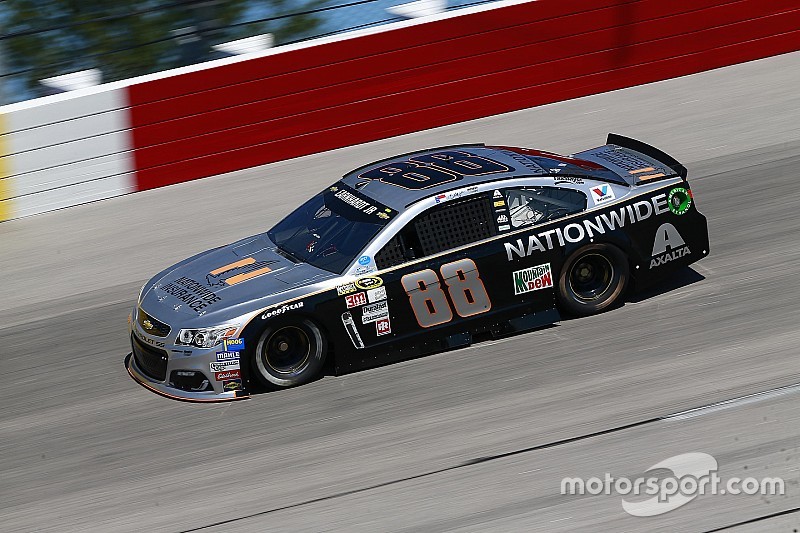 Last year Dale Earnhardt Jr. was supposed to race the Gray Ghost at Darlington Raceway. Unfortunately, he suffered a concussion and missed Darlington and the rest of the season.

Now Earnhardt Jr. will get a chance to drive the car featuring the special paint scheme this weekend at Martinsville Speedway.

“It’s my favorite paint scheme of all time in the sport,” Earnhardt said at the car’s unveiling in April. “It ran in ’79 and ’80 and ’81 as well with Bobby Allison. But Buddy Baker made this very famous — particularly at Daytona and Talladega. It was such a fast race car that they even had to put on day-glo decals on the front of it because the guys couldn’t see it coming. It was coming so fast.

“A lot of race cars seldom become icons in the sport —where they’re known by name — and this was one of them.”

Earnhardt’s admiration for the Baker goes well beyond his on track accomplishments. Although the driver known as the Gentle Giant lost his battle with lung cancer a year ago, Earnhardt was genuinely thrilled to memorialize the beloved racer through his Gray Ghost-inspired design.

“I’m very proud to tip the cap to Buddy and what he did for us, not only as a driver but in the broadcast booth," Earnhardt said. "Throughout his career in the sport, he was a huge asset."

The man behind the car

Although Earnhardt was instrumental in designing the paint scheme for the No. 88 car this weekend, David Munari was one of the original fabricators on Baker’s Gray Ghost.

The St. Louis native started his racing career towing show cars for Roger Penske in 1975. Munari, then 19, wrecked one of the AMC Matadors after an appearance. He returned the “wadded-up car” to the Penske’s Reading, Pa., facility to a less than a warm welcome.

“I told them, ‘If you give me a body shop, I can fix it.’ I welded new quarters and the deck lid and repaired it. Then Roger tells Don Miller (former Penske South president) after seeing the car, ‘This kid is a little expensive on the road, but I could use him in the shop,’ and I went to work.”

Munari worked on Bobby Allison’s Mercurys for two years and for a partial season with Dave Marcis before Penske shut down the NASCAR operation in 1977 after 12 races. Munari then moved to the open-wheel side of Team Penske, building Mario Andretti's and Tom Sneva’s cars for the remainder of the season. Sneva won the Champ Car title by 935 points over Al Unser that year.

The birth of the Gray Ghost

But Munari's true passion was for stock cars. Lennie Pond called Munari to work on his cars at Ranier Racing, and the Gray Ghost was created. The car won its first race at Talladega Superspeedway. It was also the first career win for Pond and Munari.

In 1979, Ranier hired Baker, and Munari began fabricating his Oldsmobiles.

“We built the car and started doing things no one would think of back then — better aero stuff — nose, length, underneath the car,” Munari said. “Buddy would come and help me work on the car. When it came to Daytona, everything was about his car looking pretty and fast. He would actually come and hand-sand the bottom and paint it. He would sand the floor board himself. I loved the man to death. He was one of the drivers who passed over the years that hurt me more than anybody.”

The No. 28 Oldsmobile won the pole for the 1979 Daytona 500, the first NASCAR race to feature live flag-to-flag television coverage. Baker led 18 of 20 laps to win the inaugural Busch Clash.

“When we took the checkered flag, Darrell (Waltrip) was just coming off (Turn) 4,” Munari said.

Baker won his 125-mile qualifying race. Then he held the point for the first 15 laps of the 500 until the ignition failed on the No. 28 car after just 38 circuits.

Baker ran 26 Cup races that season and won three. His average qualifying effort was 4.8 with seven poles. However, his results were marred by 11 DNFs — including seven mechanicals. The 19 races Baker finished included 12 top fives and 15 top 10s.

Baker returned with Ranier and won the 1980 Daytona 500. Munari left to work at Hutcherson Pagan and built cars for A.J. Foyt before circling back with Miller to work on the ASA program for an up-and-coming fellow St. Louisan named Rusty Wallace.

Check out video of this year's Gray Ghost:

What's in a name

To this day, Munari’s favorite car is still the Gray Ghost he worked on with Baker. He remembers being forced to affix pink day-glo numbers to car “because the independents complained that the car came up on them so fast they didn’t have time to react.”

“The car was just a rocket ship,” Munari added. “But we worked hard on it. I have to give a lot of credit to Waddell Wilson’s motors. They were fabulous. And Buddy Baker was, in my opinion, the best to ever drive at Talladega or Daytona. And that says a lot over Dale Earnhardt Sr., Tony Stewart and Junior. Tony Stewart, Dale, Junior and Buddy, they all learned how to work the wind. They were the guys.

“But we did a lot with the Gray Ghost. With Buddy, it was magical.”

Editor’s note: This story originally ran last year on Motorsport.com prior to the Southern 500 at Darlington Raceway with Jeff Gordon subbing for the injured Earnhardt.