(Note: This is the fifth and final release on the five 2011 inductees into the NASCAR Hall of Fame in Charlotte, N.C. The induction ceremony is scheduled for May 23. Bobby Allison, Ned Jarrett, Walter “Bud” Moore, David Pearson and Lee Petty are the inductees. This installment spotlights former champion and pioneer broadcaster Ned Jarrett.)

DAYTONA BEACH, Fla. – With Ned Jarrett, fans get two NASCAR legends for the price of one.

Jarrett’s two-fold talents spanned historic and modern eras – from his first championship in 1961 through a broadcast career of more than two decades, initially in radio and most famously as a member of the CBS Sports’ NASCAR television team. 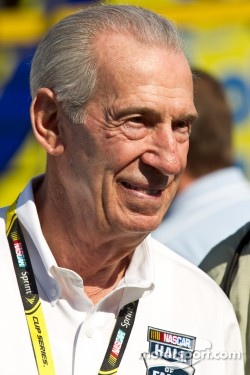 Jarrett also was promoter at Hickory Motor Speedway a few miles from his native Newton, N.C.

Born on Oct. 12, 1932, Jarrett is one of two men to have a son follow in his championship footsteps (fellow NASCAR Hall of Fame inductee Lee Petty is the other). NASCAR Hall of Fame member Richard Petty won seven titles. Dale Jarrett is the 1999 NASCAR Sprint Cup champion and like his father has become a broadcaster, with ESPN/ABC.

The elder Jarrett will be inducted into the NASCAR Hall of Fame on May 23. A 50-time NASCAR Sprint Cup winner in competition between 1953 and 1966, he’s one of only 12 drivers to reach that plateau. All but one win came in a No. 11 car; 43 of those a Ford – the most any single NASCAR Sprint Cup driver has scored in that manufacturer’s car.

A farmer and saw mill worker, Jarrett began his stock car racing career in 1952 driving a car owned by his brother-in-law at Hickory Motor Speedway, winning the track championship three years later. Jarrett won NASCAR Late Model Sportsman championships in 1957 and 1958 although his climb to stardom was anything but an easy one.

He won the 1961 championship in a Chevrolet owned by Bee Gee Holloway, a car Jarrett later sold to Wendell Scott. Despite winning just once, Jarrett finished 34 of 46 races in the top 10 and beat the previous season’s champion Rex White by 830 points.

Fourth and third-place championship finishes followed in 1962-63 along with 14 victories, a record that brought Jarrett into Ford’s factory camp. Ford placed Jarrett with Bowani Racing, a team owned by Bondy Long, whose wife was a member of the DuPont family, and brothers Walter and Nicky.

Jarrett won nine times in 1964 – including his first superspeedway victory at Atlanta Motor Speedway – and finished runner-up to Petty. 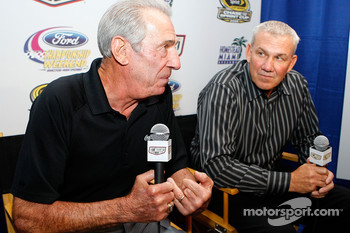 Ned and Dale Jarrett, one of two father-son combinations to win the NASCAR Sprint Cup Series championship, speak with the media after the 2008 Championship Contenders Press Conference

His most successful season followed in 1965: a second championship, 13 wins, nine poles and 45 top-10 finishes out of 54 races in which he appeared. Jarrett won Darlington Raceway’s Southern 500 by a record 14 laps, still the largest margin of victory in NASCAR’s premier division.

Ford’s exit from NASCAR in 1966 and nagging back injuries caused Jarrett to announce his retirement as a driver at age 34.

Jarrett, however, was hardly finished with NASCAR. Jarrett had been doing a weekly racing show at WNNC in Newton. Although Jarrett was popular with fans – one driver called him a “roadblock” when crowds gathered for autographs – he was uncomfortable speaking in public.

A $150 Dale Carnegie course, taken after winning the 1961 championship provided the polish he needed, joining the Universal Racing Network and later MRN, where another son Glenn, continues as a pit reporter. Jarrett then switched to television analysis at ESPN, The Nashville Network and ultimately CBS.

Sports announcers are supposed to be impartial but fans and drivers alike forgave Jarrett for his call of “go, Dale, go” on the final lap of the 1993 Daytona 500. Dale Jarrett edged Dale Earnhardt by just 0.16 seconds. Later, the elder Jarrett apologized to Earnhardt, who responded, “I understand; I’m a daddy, too.”

Jarrett remembers that afternoon as being the high point of his broadcast career along with 1984’s Firecracker 400 after which he interviewed President Ronald Reagan.

Jarrett retired from broadcasting in 2009 but continues to be in demand as a public speaker and as an ambassador for NASCAR racing.