Both Hamlin's Cup and Xfinity wins at Darlington deemed encumbered 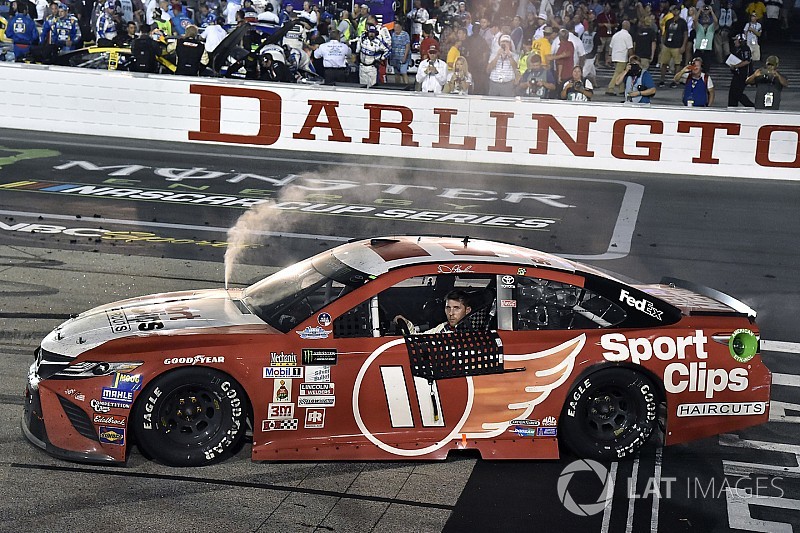 Both Denny Hamlin's NASCAR Cup and Xfinity Series victories at Darlington Raceway have been deemed encumbered by NASCAR due to rear suspension violations.

Hamlin won last Saturday's NASCAR Xfinity race at Darlington after a last-lap pass on Joey Logano before completing the weekend sweep with his second Cup victory of the season in the Southern 500 on Sunday.

Logano's second-place finish in the Xfinity race has also been encumbered. Per the NASCAR penalty report, all three issues stemmed from Section 20.14.2 of the rule book regarding the rear suspension.

In the Cup Series, Hamlin and team have been docked 25 championship points while crew chief Mike Wheeler has been suspended for the next two championship races and fined $50,000.

On the Xfinity side, the No. 18 Joe Gibbs Racing crew chief Eric Phillips has been fined $25,000 and suspended for the next two championship races. The team has also been assessed with the loss of 25 owner points. The penalty was the same for the No. 22 Team Penske Ford and crew chief Greg Irwin.

Lastly, Dale Earnhardt Jr.'s crew chief Greg Ives has been suspended for one championship race due to two unsecured lug nuts that were found on the No. 88 Hendrick Motorsports Chevrolet following the Southern 500. Car chief Travis Mack will serve as the interim crew chief this weekend at Richmond International Raceway, the final race of the regular season.

“We have a tremendous amount of confidence in Travis and everyone on the team,” said Jeff Andrews, vice president of competition at Hendrick Motorsports. “Our people have done a great job all year with the lug nut rule. We won’t dwell on it (the penalty) and will look forward to having Greg back on the box next week at Chicagoland.”