While this past weekend served as the Sprint Cup Series’ first visit to Kentucky Speedway, it also marked the first weekend in which the #71 team was under the direction of new General Manager, Harry McMullen. 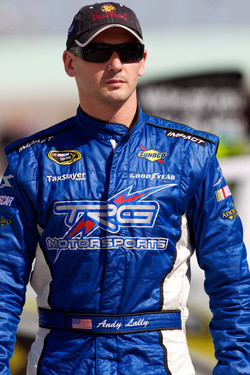 Team owner Kevin Buckler considers McMullen a valuable addition to the team. “We’re looking forward to seeing what Harry can bring to our organization. He has a strong management background and like TRG, he has a history of winning. His knowledge and experience will benefit us and he is motivated to make an impact on a developing team like TRG Motorsports. He is exactly the type of person I was seeking to help aid Andy’s development and make our program more competitive.”

McMullen believes he has found an organization that is the right fit for him. “TRG Motorsports seemed like the right opportunity for me. I wanted the chance to help guide the growth and progress of a race team. This is an organization that has a committed and determined owner in Kevin Buckler, a young and talented driver in Andy Lally and an experienced and winning crew chief in Doug Richert. There is a lot of potential here and I look forward to being a part of this team as we work to reach that potential.”