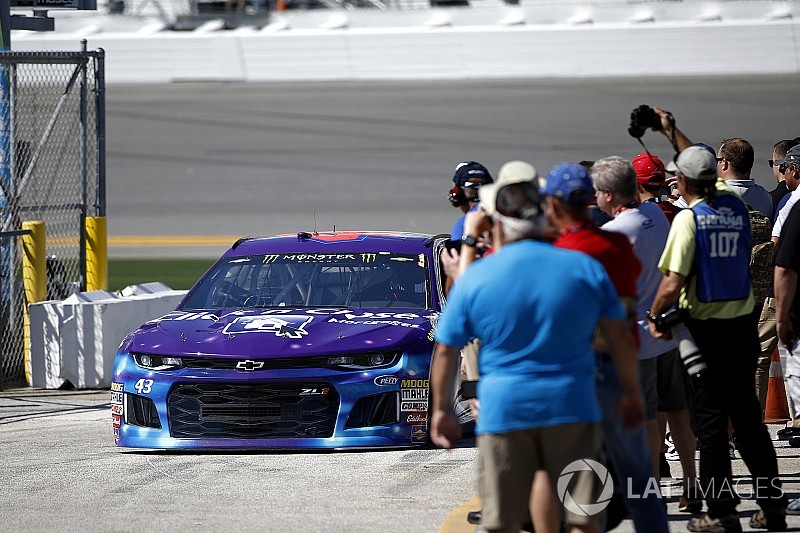 It’s a time-honored reality of sport that no one remembers who finishes second.

Darrell “Bubba” Wallace Jr. turned conventional wisdom on its head in the Daytona 500.

Kevin Harvick, perhaps the savviest marketer to sit behind the wheel of a Monster Energy Cup car, referred to Wallace’s second-place finish in the No. 43 Richard Petty Motorsports Chevy as “the biggest story to come out of Speedweeks.”

Taking the sport to another level

If Wallace’s recent spike in popularity is any indication of his promise, then Harvick is absolutely spot-on.

“He’s one of those guys that has the potential to take the whole sport to another level and expose it to people and places that we haven’t been in a long time and may have never been before,” Harvick said on his SiriusXM NASCAR Radio show Happy Hours on Tuesday night.

“When I talk about that mystique of the Danica Patrick’s of the world, she did qualify on the pole. If she would have gone out and done everything that Bubba has done in basically a week and a half in Speedweeks from the performance side, her whole thing would have blown up bigger than it was.”

Wallace is currently riding the wave. He finished third in his Can-Am Duel and second in the Great American Race. A feud with Denny Hamlin, which started with contact in their drag race to the finish line and escalated post-race, amplified Wallace's moment in the limelight.

One of the drivers who can move the needle

Harvick believes there are only a handful of drivers that can move NASCAR beyond the mainstream. And if Wallace can produce results, he'll be able to move the needle.

“There are only a few of them that can take us (beyond the sport),” Harvick added. “There’s Danica, you have Chase Elliott and Dale (Earnhardt) Jr. Then you have Dale Sr. And now you have Darrell Wallace.

Several drivers have been able to transcend mediocrity in NASCAR with an engaging personality. However, with so many entertainment choices these days, consumers expect more from athletes. Performance has to be part of the equation to enhance the driver’s brand.

Performance still needs to be there

Once Patrick’s novelty wore off and she rode around in the back of the NASCAR field and finished 24th in the standings, her presence became less positive.

“The lesson is performance,” Harvick said. “You have to look at the performance side of things. When you see all of the changes that the No. 43 team has gone through and is going through and the transition and everything that happened with Aric (Almirola) getting hurt, and Bubba coming in to drive the car and Aric moving on, and now they’ve moved their shop and changed manufacturers, they have a long road ahead of them. But the one thing that can help them move down that road is sponsorship.

“When you look at the magnitude and impact that he had on Speedweeks and the potential he could have every week going forward, it's massive and good for everybody in the sport because he can take us places that we aren’t able to reach at certain times, whether it’s media or fans. The amount of attention is second to none.”

Since Speedweeks, Wallace and RPM have picked up two new sponsors—NASCAR Racing Experience and E.E. Ward Moving & Storage. Another sponsor is in the works for Las Vegas. Wallace had support from Click n’ Close Mortgage at Daytona, which will continue as a primary for selected races throughout the 2018 season.

In his short audition during Almirola’s recovery last summer, Wallace improved every time he got behind the wheel of the No. 43 car, from 26th at Pocono to 11th by his fourth race with the team at Kentucky. His second-place result at Daytona in just his fifth race was a career-high in Cup.

Still, Harvick cautions fans to give Wallace time to acclimate to the pressures and performance that comes at NASCAR’s top level.

“I think the potential for the performance everybody saw at Daytona,” Harvick said. “I think you have to be patient with it as you go forward. There will be some bumps in the road with some things they have to transition through and work out. There’s an experience level that Bubba is going to have to go through with the Cup cars and the race tracks and all the different things that come with being a first-year driver.

“That’s the one thing I would ask the fans to be patient with. You see the potential that Bubba has in the things he did at Daytona. He knows how to race. He can go fast. He can run up front. And could have just as easily won that race as Austin Dillon did. Then where does it go? But there are going to be some bumps in the road.

"Sponsorship is the main thing and that’s really, in my opinion, is the biggest part that NASCAR should focus on and really help with to make sure that the 43 and what they need is funded, because the sky is the limit as far as how good it could be for the sport.”

Ford's North American president out due to "inappropriate behavior"

IRL: Childress teams up with Foyt for Indy 500