NASCAR: Harvick infraction "as black and white as it gets" 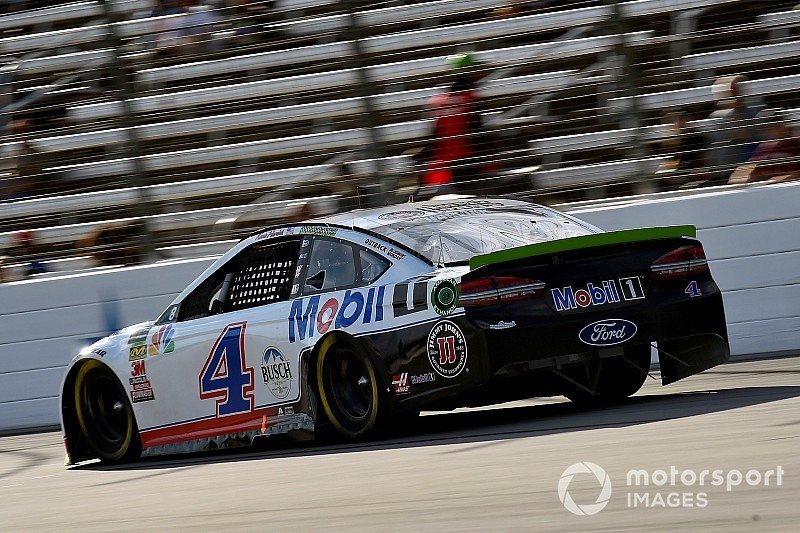 NASCAR Senior Vice President of Competition Scott Miller explains the massive penalty levied against the No. 4 Stewart-Haas Racing team of Kevin Harvick ahead of the penultimate race of the season.

With a dominant victory at Texas Motor Speedway, Harvick secured his place into the Championship 4 at Homestead.

But that all changed Wednesday morning when NASCAR slammed the team with a severe L1 penalty for a spoiler that did not meet the CAD file specifications and was actually offset to the right.

"As everybody knows, we issued a penalty for the 4 car today, and the penalty notice, which I'm sure you all got, it was spelled out that the splitter or the spoiler did not meet the CAD file," explained NASCAR Senior Vice President of Competition Scott Miller.

"The spoiler is a piece that is bought by the teams from a single‑source supplier. It has a part number from Richardson. It has a CAD file that calls out the profile of the spoiler, and the overall shape and where all the mounting holes are in the spoiler. This particular spoiler did not conform to the CAD file.

"There's two things when you're talking about a spoiler that contribute to improved aerodynamic performance, and that would be the height of the spoiler. That was correct on this one, and it would be the offset of the spoiler in relationship to the center line of the car. This one was moved to the right.

"Getting the spoiler further to the right actually – when the car goes into the corner and sees yaw, that puts more air on the spoiler, and that's definitely aerodynamic performance," he continued. "We found this back at the R&D Center when we matched up the spoiler to the CAD file, which basically is just a stock part that every team can buy, and it didn't match up. That's what put us where we are today.

Miller asserted that there was no chance this was a manufacturing issue with the No. 4 team's spoiler.

The penalty resulted in the suspension of Harvick's crew chief and car chief for the remainder of the season, a 40 point loss in the driver and owner point standings, as well as stripping Harvick of a guaranteed place in the Championship 4. He now enters ISM Raceway (Phoenix) on the bubble, just three points to the good with the safety net that came with his Texas win gone.

The one thing the team gets to keep is the trophy and the victory in the record books. However, there's a possibility that might change for future infractions in 2019.

"You know, we're actually looking at a lot of different things in the off‑season in regards to the deterrence model, all the way to – I mean, we've heard the fans kind of call out for, why don't you disqualify the offending car? And I mean, that's actually a topic of discussion along with many other things related to the deterrence model. You know, stiffer penalties at track and for failing inspection – a lot of different things on the table.

"With any of those, there's a lot of things to work through and a lot of things to consider, especially when you kind of get to the disqualification level or something like that. You know, like there's a lot of knock-on effects from that as to how the rest of the field shakes out and all that. But certainly points, deterrence models, fines, suspensions, all that stuff is always on our plate during the winter. We always review what has happened in the current race season and always are looking to improve that process."

As for safeguarding against a similar situation in the title-decider at Homestead-Miami Speedway, NASCAR will do their due diligence to ensure none of the contenders get anything past the sanctioning body's scrutineering process.

"As Homestead approaches, and even now when we're down to eight championship contenders now, soon to be down to four, the level of scrutiny that goes into those cars and the amount of time that we really spend keeping an eye on everything with those cars, knowing that so much is on the line, we can do and concentrate on those cars a little bit more than we can the 40‑car field during the regular season," said Miller. "So we'll just ramp up the intensity of keeping people with eyes on those cars throughout the weekend and scrutinize those cars heavily, both before and after the race.

"In the case of the spoiler here, we'll be looking at the spoilers. It's unfortunate that now we'll be pulling spoilers off and having to do another inspection when the teams should really be bringing legal cars to the racetrack and we shouldn't have to necessarily do that inspection all the time. As the field gets pared down, we can concentrate more on the cars that are in the hunt for the championship."

Miller also explained that due to the usual at-track teardown performed following the season finale, if an issue arises, it won't be coming out in the middle of the week.

"The engine and the car will be scrutinized there [at the track]. Homestead could potentially turn into a Sunday‑night issue, but it certainly won't be the middle of the week. And I think we will be able to have eyes on those cars with all these little things, and the other stuff with crush panels and leaking air and all the different things that the teams try to manipulate, we can keep eyes on those things and see things quickly at pre‑race, post‑race, all of those things at Homestead. We feel good about the process."