JEFF GORDON, NO. 24 DRIVE TO END HUNGER CHEVROLET met with media and discussed his 40th birthday, the challenges of Pocono Raceway, pit strategy at Watkins Glen, and more.

HOW WAS YOUR BIG BIRTHDAY? “It was great! It was really sweet. My daughter came in in the morning, singing Happy Birthday to me. That was very special. And throughout the day, you start thinking wow, I’m 40. Every once in a while it kind of sinks in, but again it’s just another day and it’s been 40 great years. Especially after having that spectacular run at Indy; and the way we did it, it made for a great week.”

HOW WAS PRACTICE? “We struggled today. We pretty much came back here with the same set-up that we had here the last time; very similar, we’re trying to make a few improvements in our qualifying runs because we’re afraid it might rain tomorrow. We’re pretty far off. We looked at our notes from the last time we were here and we pretty much have the exact same situation. We struggled in practice for qualifying runs but we qualified really well. So hopefully it doesn’t rain tomorrow and we can get that run in. If not, we’re going to be starting middle of the pack. And when we went in our race runs, I thought we were pretty competitive.”

WHAT IS IT ABOUT ‘SWEEPING’ BOTH RACES AT POCONO SO TOUGH? “Well, the conditions; even though it’s a short period of time that goes by (between the two Pocono race dates), it just seems like the track conditions are quite a bit different when we come here the second time. The first time usually it’s a little cooler and I don’t know what it is, but the track just seems to have a little more grip. When we come the second time we just really struggle to get the grip in the car. We’ll find out. So far, it hasn’t been really super-hot here today or anything. So far, it seems like the conditions are fairly similar to what we had the last time.” 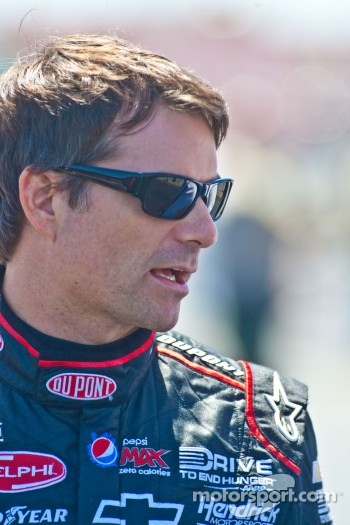 HOW DOES THE WILD CARD IMPACT THE SEASON? “It’s making it very interesting. I think it creates a lot of story lines. It basically keeps everybody in it. In the past, when you were outside the top 12; let’s say you’re 16th or 18th, you pretty much feel like you’re out of it. Where now, especially somebody like (Brad) Keselowski, who has won a race, you know he wins one more race and his chances of being in there are very, very good. I like the fact that it pushes people to take a little extra risk to try to win races. I wish Paul Menard hadn’t taken quite as much of a risk as he did last weekend (winning at Indy), but I think that’s what it opens the door for is somebody who is capable of winning races to still be in the Chase. So, I like that.”

WE’VE SEEN A LOT OF PIT STRATEGY AND FUEL STRATEGY PLAYED OUT AT THESE RACES. DO YOU THINK YOU’D BE ABLE TO TAKE A GAMBLE LIKE THAT WITH PIT STRATEGY NEXT WEEKEND AT WATKINS GLEN? “It’s a little harder to do on the road courses because you’re down-shifting into the corners; so I think it’s a little bit harder to save as much fuel as you really need to save. But we’ve always seen how much fuel mileage plays a role on road courses. So it definitely can be a factor. But it seems to me like every weekend it’s a factor. Every weekend you have to consider, you have to think about it, and in some ways you have to plan for it. It all depends on where you’re running and when the caution comes out. It seems like if you’re in the top 10, you play tires and fuel and try to have a fast race car to drive to the front and win the race that way. If you’re outside the top 10, then you kind of have nothing to lose and everything to gain, so you take the big risk on the fuel mileage.”

WHAT IS DIFFERENT FOR YOU AT WATKINS GLEN VERSUS SONOMA? “Well, it’s a much faster and more aggressive track. It’s not as much of a finesse track. Sonoma, you’ve really got to be careful overdriving that track. Where at Watkins Glen, you’ve got to attack the track and it’s quite a bit different. It’s like the difference between Martinsville and Bristol.”

LAST WEEK’S INDY CROWD WAS THE WORST IN 18 YEARS. IF THEY CAME TO YOU AND ASKED HOW THEY COULD GET IT BACK TO WHERE IT WAS, WHAT ADVICE WOULD YOU GIVE? “Oh, man; I’m the one asking that question because I’d like to know that myself. I certainly don’t have any answers. I love going to Indianapolis. I don’t know. I don’t know enough of the details. I don’t know what the ticket prices are. I don’t know what’s on people’s minds that’s preventing them from going to a race like that. Has the prestige, from a fan, worn off a little bit?”

DID THE TIRE RACE (2008) REALLY HURT THAT MUCH? “I think it hurt a little bit but you know Indianapolis has never been about spectacular racing in a stock car. We don’t put on a great race. It’s very hard to pass. It’s a lot of follow-the-leader. So, a lot of it has to come down to the fans really wanting to be there and be a part of that event because of the history of the speedway. We still had a big crowd; it’s just not a big Indianapolis crowd.”

YOU’VE HAD SO MANY WINS AT BRISTOL AND DOVER, CAN YOU TALK ABOUT YOUR SUCCESS AT CONCRETE TRACKS? “Yeah, I’ve never really looked at it as a concrete thing versus a pavement thing. I think you’re either good at a track, or you’re not good at a track. There are certain aspects I like about concrete and certain aspects I don’t like about concrete. In a perfect world, I’d rather have a pavement track. But the problem is, I remember the days, especially at Dover, when we were tearing up the pavement; and at Bristol, when we were tearing up the pavement. I think these days it’s a little different. I think tracks could go back to being paved because I think the companies have done a much better job with how they cure the pavement and how it holds together. But I never got a chance to race at Nashville. I think I may have tested there one time. It seemed like a nice track. Maybe NASCAR can work something out to get the Nationwide cars back there. I think it would be a shame for them not to be running there. I think it’s an important market as much as it a nice track.”

JOSEPH MATTIOLI HAS JUST ANNOUNCED HIS RETIREMENT FROM POCONO RACEWAY. CAN YOU TALK ABOUT YOUR RELATIONSHIP WITH THE MATTIOLI FAMILY OVER THE YEARS? “Yeah, they are very special people and how they care about this place. They care about the competitors and the fans. To me, a great sign of what kind of leader you are is those that take the reins after you and I think that he’s done a pretty awesome job to put it in good hands. I think he certainly put in his years of commitment and dedication; and maybe he can go enjoy himself a little bit and let somebody else do the work around here. I feel pretty confident it will continue to be a strong group effort to put exciting races on.”