Jimmie Johnson: "We’re a victim of our own success" 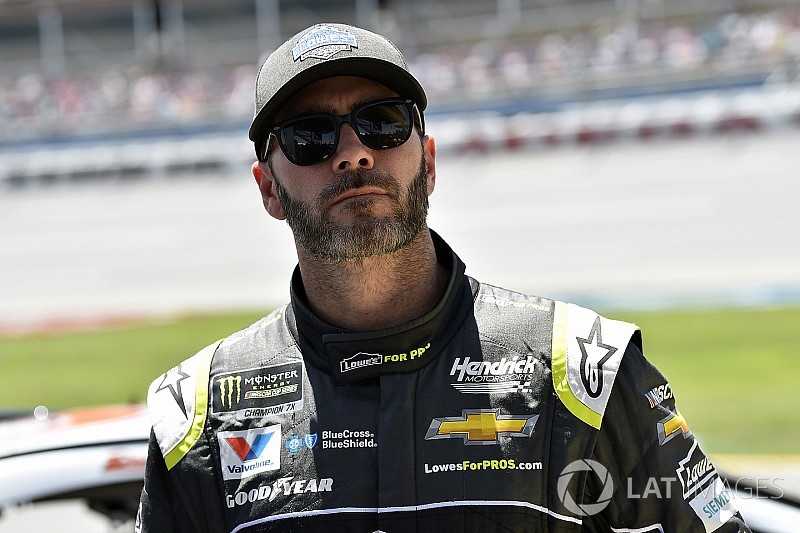 Jimmie Johnson is a facing winless drought that dates back nearly a year to June, 2017.

But this weekend, he returns to the site of his most recent victory and a track he has enjoyed tremendous success at. Johnson has 11 wins at the 'Monster Mile,' a total that far exceeds any other active driver.

“I can relax a little bit more coming to this race track," he said Friday. "With it being my best track and the love I have for this place, I’m always excited to come, but trying to get the No. 48 car back into Victory Lane, I can take a little pressure of myself here knowing that the rhythm-style and the way you drive this track and the set-up for the car.  We’ll get it close, and history shows that. Hopefully we get it perfect and we can have the day that we really want to have and get back to Victory Lane."

All eyes will certainly be on the No. 48 team come Sunday, but should they fail to perform, many will see it as an alarming sign that they are not the team they once were. Johnson had an interesting perspective on that, saying, "I think I'm doomed, regardless right now."

He elaborated: "I mean it doesn’t matter the track or the result unless it’s a win, and lots of wins. I think we have created an environment of very high expectations because of the success we’ve had and I think people forget how special our run has been and we certainly want to get back into those ways and have it happen again. But history shows it doesn’t happen very often. And we’re very fortunate to harness lightning for a long stretch of time.

"The encouraging news is we are making our cars better each and every week. I’m more of a realist in where we’re at and what we’re doing, and reflect back and think damn, we had it really good for a while and it was really special. But we’re a victim of our own success, and I hope to create the headlines that we want and the headlines being along the lines of well, they should have won. It was Dover.”

When asked to pinpoint where the No. 48 team is lacking, the seven-time series champion said it all has to do with getting the cars back to where they need them to be.

“We just haven’t had the cars where we need them. And, I’m a part of that process. So, I’m not pointing fingers. I think as a group from everybody at Chevrolet and everybody at Hendrick Motorsports and everybody on the No. 48 car and my other three teammates and their teams, we collectively need to do a better job."

Hendrick Motorsports has yet to win in 2018 with all four drivers between 12th and 20th in the championship standings. By comparison, Johnson already had two wins at this point last season and sat eighth in the standings with teammate Chase Elliott fourth. But he's confident that they are moving in the proper direction.

"We’re working hard on it and we are doing a better job (and) we’re seeing those rewards slowly coming along. I think we have been the benchmark or that high watermark for so many years, that other manufacturers and teams invested a couple of years in figuring out how to beat us. And we’re living through that right now. We’re needing to recreate ourselves and how we go about handling business. And a lot of that change has happened and I think it’ll just take a little bit longer before it really starts providing for us.”