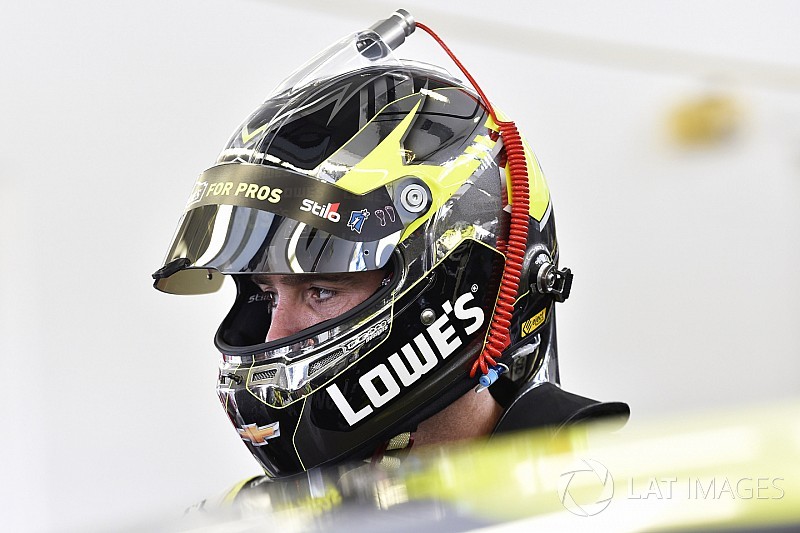 After falling nearly two laps down early in the race at Las Vegas Motor Speedway, Johnson rebounded to score his best finish of the season. His streak of finishing outside the top ten has grown to nine races and his winless streak extends to 26 races.

Johnson started in the rear of the field after his car failed pre-race inspection three times and NASCAR ejected his car chief, Jesse Saunders, from the garage before the race.

Johnson said that starting from the rear was a challenge. He displayed patience as his team worked during every pit stop to improve car better, giving him an opportunity to battle for a top ten finish late in the doing.

“You just go,” said Johnson. “There is nothing you can do. At the end of last year and even in Atlanta I was trying too hard. Just giving 100 percent and driving the car where it’s at and bringing it home is what I need to start doing.

“I have been trying to carry it and I’ve crashed more cars in the last six months than I have really in any six month stretch or whole year stretch. Just trying to drive it 100 percent and not step over that line.”

Johnson and the other Chevrolet drivers are still working to get their arms around the new Camaro ZL1, but they feel that they are learning something new every week.

“There is a piece of performance that is familiar from last year, so I think we have some work to do ourselves underneath the body with the chassis and the set-up of the car,” he said. “But, today I was in a lot of different aero situations that at first I was flinching in and then I grew very comfortable with and kept charging and driving through.

“I think the body is definitely helping the car, we’ve just got some other stuff to sort out to go along with it and kind of find the sweet spot for the car, too.”

Although he’s enduring the longest streak of his career without a top ten and a win, Johnson is eager to get to Phoenix next weekend.

“Phoenix has turned into an aero track, just with the repave and the higher speeds to a small degree. Fontana will be like Atlanta,” Johnson said. “We are always learning.  This car is so new to us we are still learning every time we get on track.”

Kyle Busch not worried about Harvick's dominance: "It's early"

Truex admits Harvick in “his own zip code again”