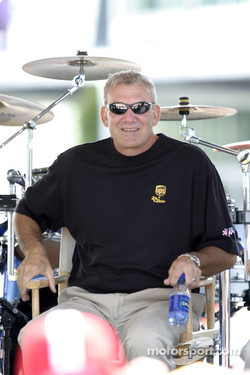 Editor’s Note: In honor of Interstate Batteries’ and Joe Gibbs Racing’s 20th anniversary together in NASCAR, a series of press releases highlighting 20 big moments will be distributed throughout 2011. This is the 14th of the 20 releases.

When Joe Gibbs came from the National Football League (NFL) to NASCAR in 1992, he brought several things with him from his time as a Super Bowl-winning coach with the Washington Redskins.

He brought leadership, the ability to motivate people and a pedigree for winning to the start-up Joe Gibbs Racing (JGR) NASCAR Sprint Cup Series team which hit the track for the first time in 1992.

He also brought the Redskins logo, along with those of the other 27 teams in the NFL at the time. Gibbs’ drivers would use a different race helmet each week that was painted to look exactly like that of an NFL team in partnership with the league during the early years of JGR.

Dale Jarrett, the first driver of the No. 18 Interstate Batteries car for JGR from 1992 to 1994, and later Bobby Labonte, who took over the seat in 1995, wore a different helmet every week. If they were racing at New Hampshire Motor Speedway in Loudon, the helmet would look like the one used by the New England Patriots. When they raced at Michigan International Speedway in Brooklyn, a Detroit Lions scheme would be used. And, of course, at Richmond (Va.) International Raceway, the Redskins helmet design would be used.

It was a unique partnership that gave JGR an early identity.

“It was a fun deal for myself, being a big sports guy,” Jarrett said. “I’m a big football fan, so it was pretty cool and definitely unique.”

But perhaps nothing could prepare JGR, or specifically Gibbs, for what would occur during the beginning of the team’s second season on Feb. 14, 1993, in the 35th Daytona 500. The legendary Dale Earnhardt led 107 of 200 laps, but he was passed by Jarrett’s No. 18 Interstate Batteries car on the last lap while Jarrett’s father, Ned, excitedly called the action during the live CBS broadcast.

The “Dale and Dale Show,” as it was referred to by Ned Jarrett on the telecast, is still considered by many to be one of the best races in NASCAR history. The victory was the first for JGR and came in the sport’s biggest race.

And Jarrett won wearing a helmet painted like that of the Dallas Cowboys – the archrival of Gibbs’ Redskins.

“I told Dale before the race that, if we win, I do not want to see that helmet anywhere in victory lane,” Gibbs said. “Everyone knows how big that Cowboys-Redskins rivalry is. It’s one of the best in sports. I think Dale did a pretty good job of keeping it hidden.”

Jarrett, for his part, did his best to keep the helmet out of the spotlight.

“It was pretty funny, actually,” Jarrett said. “I remember looking at the schedule of where we would wear certain helmets and telling Joe, ‘Are we really going to wear a Cowboys helmet at Daytona?’ But that was part of it, we had a deal with the NFL and they really wanted that helmet at Daytona. I remember we talked about it and he said, ‘Just make sure that thing is kept inside the car and nobody really sees it, because I don’t want any part of that.’

“I know we did some pictures before the race, because we always did pictures with whatever helmet we were running that week. But I don’t remember taking any pictures with that helmet in victory lane after we won, especially with Joe around. There were a lot of questions asked when we got in the press room after the race about me wearing a Cowboys helmet, but Joe sidestepped them as much as he could and made light of it. He tried to play it off as though it didn’t bother him, but you could tell he would have much rather I had a Redskins helmet on at that time.”

While the partnership was certainly an attention-getter and something no other team could utilize, it was also a great challenge for both the driver and the team.

Normally, a driver finds a helmet that he likes and wears it for several weeks in a row because it’s comfortable, much like a broken-in pair of shoes.

But for Jarrett, he had to wear a different helmet every week.

“It was a challenge, somewhat,” Jarrett said. “As much as they try to make those the same, they’re not the same. They did a pretty good job of getting them to me ahead of time so I could try them on and make any adjustments if we needed to. But it was a challenge to make all of that happen and, especially if you had one that really fit well, you wanted to run that one for a while.”

Jarrett wasn’t the only one who had to work with new helmets every week. His crew chief Jimmy Makar, now the senior vice president of racing operations at JGR, had to ensure that the helmets not only arrived on time, but that they would get installed with radios in time for the race weekend.

“It was a really cool program but the logistics of it were very hard,” Makar said. “To switch helmets every week, and have that helmet fit comfortably every week on a drivers head, is very hard. People don’t realize that, when you sit in a car for three or four hours and even if there is just a slightest issue with the fit of the helmet, it can be very annoying to the driver.

“Plus, you had to put a radio in each helmet, so you had to make sure all the wiring and microphones worked. I know Dale worked through it, and so did Bobby. From a team standpoint, to pull that off, it took a lot of coordination and a lot of effort.”

So, in the mid-1990s, when the partnership with the NFL came to an end, perhaps everyone wasn’t too upset to see it come to a close.

“Deep down, I think I was pretty happy that deal was over,” Makar said with a laugh. “It was a really cool partnership but, as I said, it was tough to pull off every week. But it was good for us and it was good for the sport. You’ll probably never see anything like that again.”