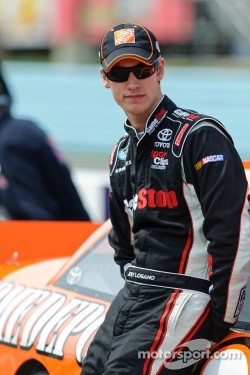 LOGANO LOOKS TO STILL GET DRESSED UP, EVEN AFTER HALLOWEEN: Joey Logano went to a few Halloween parties in the past week. He dressed up as movie star/comedian Russell Brand at one of them. At another, he was Lloyd Christmas, also known as half of the pairing from the movie Dumb and Dumber (the other half was roommate Coleman Pressley). At Texas Motor Speedway, Logano will hope to dress up as a victorious cowboy. That’s because the winner of any race at Texas is rewarded a cowboy hat in Victory Lane. And Logano will be looking for his first Texas Motor Speedway cowboy hat this weekend as he returns to the seat of the No. 20 GameStop Toyota in the NASCAR Nationwide Series. And Logano has been close before; last year, Logano finished second to teammate Kyle Busch in the spring race. He also has three career fourth-place finishes at Texas, including earlier this season. Along with his four-career top-five finishes, Logano has also recorded a pole at the 1.5- mile track.

CHASSIS: The JGR team will bring chassis #136 to Texas for the race this weekend. It will be the first race of the year for the chassis. Chassis #132 will serve as the team’s backup.

Joey Logano Quotes: “Texas has always been a strong track for us, even though our record doesn’t show it. Our average finish position there is like an eighth, but it really should be even better than that. We just missed winning a race there last season and we’ve finished fourth a bunch. But we had better cars than those fourth- place runs were. Pit strategy and other problems have kept us from a couple of wins at the track I think. So going into the weekend, I know this is a place we should be able to run up front at. And after our run at Charlotte, which is similar in size and shape to Texas, I feel even more confident. I’m looking for a good weekend in Texas.

“It’s no secret that we’ve not been as strong on the 1.5-mile tracks this year as we have in the past. But the entire Joe Gibbs Racing organization has been working hard at making our stuff better and we really showed it in Charlotte. I thought we were one of the two or three best cars at Charlotte. Unfortunately, we had another run in with a competitor that we’ve tangled with this year and that took us out of contention. But our GameStop Toyota was fast at Charlotte and I think we will be just as good at Texas. I know the guys were talking about Texas all weekend long in Charlotte and making sure everything we did there carried over to here.

“Texas is always important too because GameStop is just down the road and one of the things I really want to do is get them in Victory Lane right here at their home track. We’ve been close, so getting that little bit more out of it and having all of the guests that they normally bring to the track get to celebrate would be huge. We normally have a lot of executives come to this race, so we’ll ready to go. Plus, we are promoting Call of Duty: Modern Warfare 3 this weekend, which is one of the biggest selling games of the year for GameStop. That would be a huge plus to get them in Victory Lane. They just told me that the entire Call of Duty series of games have sold nearly 95 million copies since it started. That is huge. So to get this Call of Duty car into Victory Lane would get a lot of extra attention.”