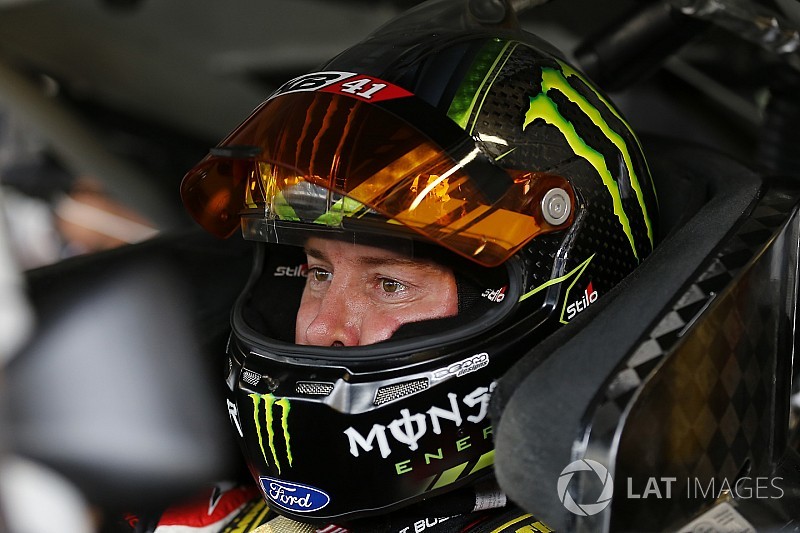 The 2017 postseason did not go according to plan for Kurt Busch.

The winner of the season-opening Daytona 500 was eliminated after the first round of the Monster Energy NASCAR Cup Series Playoff.

But on Sunday at Kansas Speedway, Busch finished second—his best result since that February win at Daytona. He credited crew chief Tony Gibson with the gutsy call that brought Busch from a lap down to his first top-five finish of the postseason.

“We were close,” Busch said on SiriusXM NASCAR Radio. “Our car was really in a unique spot because it had speed but, yet, it would go through these different phases.With sticker tires it was lightning fast, then after a 10-lap run, it would start to head towards the loose side. Then at Lap 30, it would go to the tight side. It was like the tires had different phases and luckily, it all timed out perfect.

“Where we got in a good position was when (crew chief) Tony Gibson put on 10-lap old scuffs from the beginning part of the race, right at the end of Stage 2 and that put us back on the same sequence as the leaders, to have the same amount of sticker tires we had left in the pits. Then we had to battle back on that track position. So it all positioned itself around the tires.”

Busch believes that anything in the top 10 is a gift right now. Although the Toyotas have exhibited tremendous grip—particularly on intermediate tracks—that hasn’t necessarily been the case for the Fords and Chevys. Busch cited Jimmie Johnson incidents at Kansas, where the seven-time champion spun out--not once, but twice--as to how aerodynamically sensitive the cars have become.

“The mentality that I've been trying to accept right now is run for 10th, try not to push the car too hard,” Busch said. “Anything above 10th is icing on the cake. You just go where you can. I've been trying to drive it too hard. There are guys like a seven‑time champion who spun in front of me today just because of the insecurity that these cars have when they're side‑by‑side, the way that they're affected by the air.

“I know for us, we're not on the positive side of the grip level curve. We're right behind it. So I just need to keep the car at that level. Yeah, we'll try to build on it. It's a matter of just keeping track of the adjustments throughout the race, making sure that we use every set of sticker tires that we possibly can and get the most out of sticker tires. When we have scuffs, we struggle. We're a 15th-place car on scuffs.”

Still, the momentum from Sunday’s second-place run is something the team can build on with four races remaining in the season. Busch could use a little stability in his work life since he’s been in limbo since August 1, when Stewart-Haas Racing did not pick up the extension on his contract.

“Nothing has changed there,” Busch said. “It’s still very comfortable at Stewart-Haas in the way that everybody is talking, but nothing has been slid across anyone’s desk yet. Still, trying to tidy up things here and there. But nothing to announce or give an update about.

“For us, on the 41 and our crew guys, we really wanted to run better in this playoff run. So second-place last week. We’ve got four to go, let’s try and make the latter half of the playoffs the best that we can make it.”

If there is something more curious to Busch than his contract negotiations, it would be Martinsville Speedway. The 2004 NASCAR champion has endured a love-hate relationship with the half-mile paper-clip-shaped track over his last 34 starts. Busch won at Martinsville in his fifth start, then didn’t win again until his first visit with SHR in 2014.

“I’ve been doing this for 18 years, now, and I never know if I’m going to hit the pace car or take the checkered flag,” said Busch, who will carry the State Water Heaters livery on the No. 41 Ford this weekend. “Martinsville is the toughest track for me to digest. Most times, I’m just out there, slip-sliding around, not having that forward bite and that forward drive coming off the corner. Then there are other times when we unload and we don’t change anything and we have a race-winning car.

“All of that is off of the tires or the ride-height rule that’s changed. It’s amazing how that track stays the same, but each time we go there, it’s pot luck.”