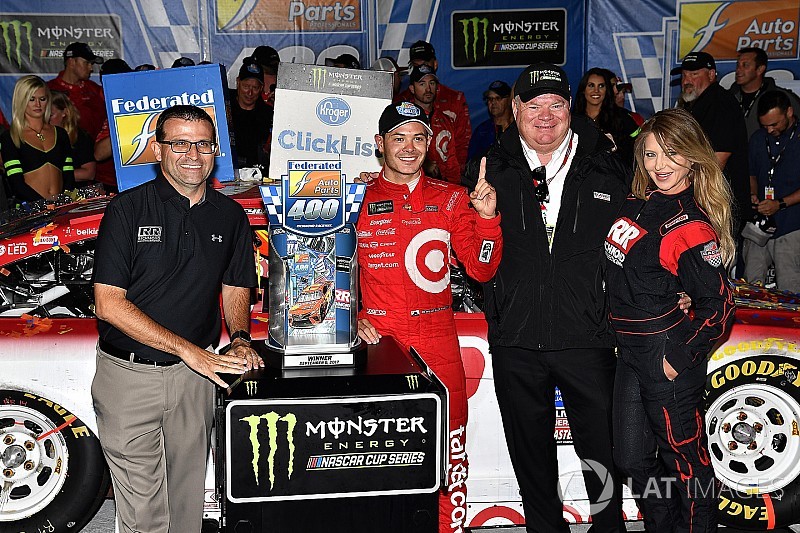 Kyle Larson picked up his fourth win of the season in a mad dash to the finish at Richmond Raceway on Saturday.

A late-race caution sent the Federated Auto Parts 400 into overtime with Larson at the point thanks to a remarkable pit stop by the No. 42 Ganassi Racing team.

Larson got a great jump on Martin Truex Jr., who led a race-high 198 laps. But as the field came through Turn 1 on lap 403, Hamlin clipped Truex and sent the No. 78 Furniture Row Racing Toyota into the wall. Larson held off Joey Logano by .951-seconds at the line.

“That was a helluva a job, the pit crew won the race,” crew chief Chad Johnston.

"Those five bonus points with the win tonight is huge for us," said Larson after his fifth-career win. "I can't thank the team enough, this has been such a fun season."

Elliott, Jamie McMurray (14th) and Matt Kenseth (38th) were the last three drivers to transfer into the playoffs.

Truex, who lost the race but enters the playoffs on top of the standings, started the final segment where he left off — at the point — when he led the field to green on Lap 209. Kenseth was second followed by Logano, Larson, Keselowski, Jones, Earnhardt, Kurt Busch, Kyle Busch and Bowyer.

After the first five laps, Truex’s lead over Larson was a half-second. Jones, Kurt Busch, Kenseth, Keselowski, Logano, Bowyer, Busch and Johnson completed the top 10. Keselowski passed Kenseth for fifth on Lap 220. Logano followed on the next circuit. Keselowski advanced to fourth on Lap 222.

Truex moved out to a 1.351-second lead over Larson by Lap 240. Jones, Keselowski, Kurt Busch, Logano, Bowyer, Kenseth and Earnhardt completed the top 10. Working Lap 244, Keselowski was all over the back bumper of Jones. He finally drove under the No. 77 Toyota entering Turn 1 on Lap 244.

“We don’t have the overall grip that we had,” Jones said after dropping to fourth.

Kurt Busch caught Jones on Lap 250. He drove underneath the No. 77 car on the backstretch for fourth-place. Truex’s advantage was two-seconds over Larson.

Danica Patrick was set into the spin cycle in Turn 1 while battling Austin Dillon for 19th on Lap 254. Truex led the drivers down pit road but there was an ambulance blocking the entry. Kenseth plowed into the back of Bowyer’s car and damaged his radiator beyond repair.

“I didn’t think I was going that fast,” Kenseth said. “There was an ambulance down there and I couldn’t get stopped in time.”

Larson fought to hold off Keselowski on the Lap 263 restart. After the first lap, Truex moved up to third, followed by Kurt Busch, Logano, Jones, Kyle Busch, Earnhardt, Suarez, Kahne, Elliott and Johnson. Busch moved back to third on Lap 265 followed by Truex, Jones, Logano, Earnhardt and Kyle Busch. By Lap 270, Truex was third. He moved to second eight laps later. Larson’s lead over Truex was .342 on Lap 280 but the No. 78 was closing in.

Truex completed the pass on the inside of Larson on Lap 287. Keselowski held third followed by Kurt Busch, Jones, Logano, Earnhardt, Kyle Busch, Elliott and Kahne. Johnson passed Kahne for 10th on Lap 294. On the next circuit, Kurt Busch passed Larson for second.

Truex pitted from the lead on Lap 335 handing over the point to Earnhardt.

On fresh tires, Keselowski passed Bowyer for second on Lap 342 but Earnhardt still held a four-second advantage over the No. 2 Ford. Logano was fourth followed by Truex, Larson, Suarez, Harvick, Kahne and Kurt Busch.

Keselowski captured the point from Earnhardt on Lap 347. Truex ran third followed by Logano, Larson, Bowyer, Suarez, Kurt Busch, Harvick and Jones. Truex took second on Lap 350 and moved to within two car lengths of Keselowski. Truex moved to the inside of Keselowski and took the lead at the line on Lap 354. Larson ran third followed by Logano, Kurt Busch, Suarez, Jones, Kyle Busch, Kahne and Harvick. On Lap 357, Earnhardt and  Harvick pitted.

Truex checked out with nearly a four-second lead over the No. 42 Target Chevy with 15 laps to go. Keselowski, Kurt Busch, Jones, Kyle Busch, Suarez, Newman, Johnson and Logano remained in the top 10 with only 13 cars on the lead lap. Busch and Jones moved past Keselowski just before the caution flew for Derrike Cope with three laps remaining to send the race into overtime.

Larson grabbed the lead off of pit road. Truex, Kurt Busch, Keselowski, Jones, Kyle Busch, Suarez, Hamlin, Newman, Logano, Johnson, Elliott and Kahne followed. Larson jumped out to a half-second lead after the first lap followed by Truex, Hamlin, Logano and Kurt Busch. Contact between Truex and Hamlin sent the No. 78 Toyota into the Turn 1 wall on Lap 403.

"I've got such a great team and definitely the best pit crew - that showed tonight. They were money all night long, we gained spots. This win is huge congrats to them," Larson said. "We were second-best on the last run but it came down to the last restart there. I got good start. I was a little nervous getting into (Turn) 1.
"I'm feeling really confident for the playoffs. We have a real shot for the championship I feel like this year."