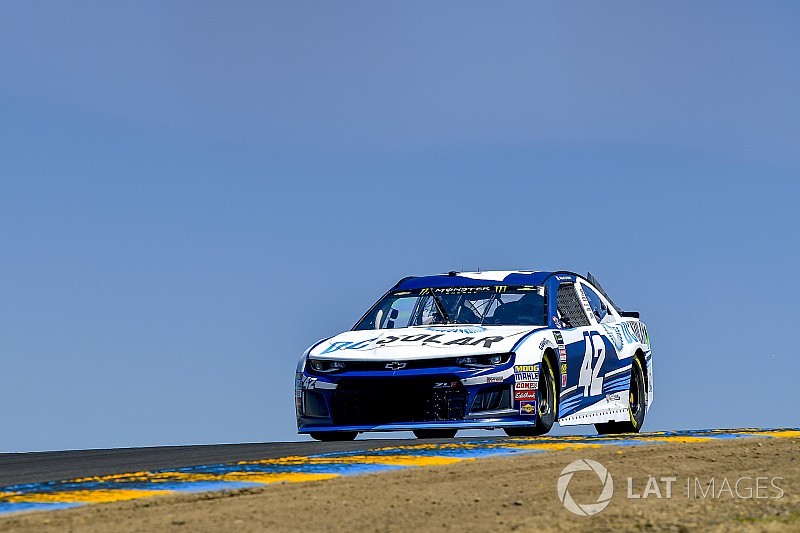 Several drivers look at Sonoma Raceway as a unique opportunity to outshine this year's dominant drivers and snatch a victory for themselves.

Kyle Larson says he still has a way to go.

Chase Elliott continues to search for that first win in NASCAR’s top series.

AJ Allmendinger is seen as one of the top talents on a road course.

Jamie McMurray? It’s been 163 races since he went to victory lane.

None of the four, along with a host of others, is currently guaranteed a spot in this year’s playoffs that begin in September.

Yet each one hopes to correct that when the Toyota/Save Mart 350 gets under way today at Sonoma (Calif.) Raceway.

In a season that has thus far been ruled by guys named Harvick and Busch, and to a lesser degree Truex and Bowyer, today’s race provides a prime opportunity for a new, or at least different, face in victory lane.

Larson will go off from the No. 1 spot, having earned his second consecutive Busch Pole Award at the 11-turn, 1.99-mile road course on Saturday.

"I don't really know what to expect"

He is hoping, of course, to do a bit better this time around – last year he led the first nine laps, then was never heard from again.

“I don’t really know what to expect, but I feel like the balance of our car in practice was a lot better than what it was in the race last year,” Larson said.

“In the race last year, I couldn’t even turn. I would be off the gas, turn the wheel and I would just drive straight off the track. I had no grip.

“I don’t think we have winning speed … but neither did Tony Stewart the year that he won and I’m sure there are other years where people won that didn’t have winning speed but were able to get the job done. As long as we can keep ourselves in position, catch some breaks, I think we will have a good shot.”

Larson (10th in points) and Elliott (13th) are inside the cutoff line for earning one of this year’s 16 playoff positions but can’t afford to take anything for granted. With 11 races remaining before the field is set, Elliott is only 35 points inside the cutoff.

McMurray, Larson’s teammate at Ganassi, sits outside the top 16 in 19th; Allmendinger is 23rd.

Opportunities dwindle with the passing of each weekend, making races at Sonoma as well as Watkins Glen later in the summer all the more important.

On the ovals, short and long, others have dominated. Sonoma levels the playing field somewhat, but only for those who can successfully navigate their way around the speedy layout.

“I have a hard enough time putting two corners together at the oval,” Elliott confessed after earning the No. 3 starting spot. “So, putting 11 of them together in one lap is tough.”

But, he said, “plenty good enough starting spot for sure to have a chance.”

Allmendinger has been to victory lane once in his Cup career, but it came at Watkins Glen, the series’ other road course. His better finishes have come there too, but Sonoma is still a place the JTG-Daugherty Racing driver can excel. Under the right circumstances.

“I think we are more competitive than we were last year, so I think we are in for a decent day,” Allmendinger said after qualifying fifth. “Just try to hit everything and make sure that we put a solid day in.”

McMurray, another who has experience and a talent for turning left and right, has three career poles at Sonoma but only three top-10 finishes.

Of course, Kevin Harvick, defending race winner and winner of five races this year, and Kyle Busch, winner of four, Martin Truex and Clint Bowyer (two each) aren’t exactly showing up just for tow money. To get to victory lane, Larson and others will have to do something few have managed this year – beat those four.

It can be done anywhere. But given the way this season has played out thus far, that seems unlikely.

Sonoma, full of twists and turns, looks a lot like the land of opportunity.

Allmendinger wins Stage 1 at Sonoma after Truex and Harvick pit