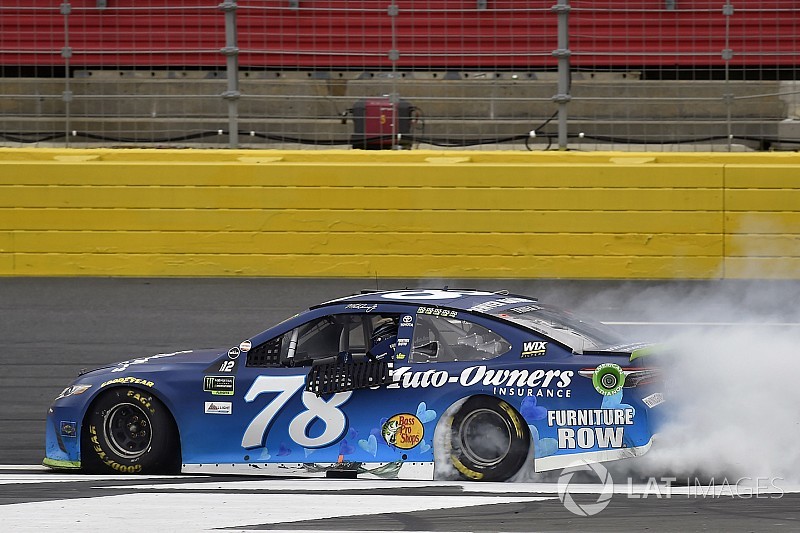 The Motorsport.com NASCAR team of Jim Utter and Lee Spencer answer this week's questions from fans.

Could a victory burnout really be used as a cover up for illegal modifications? - From Ray

Ray, in theory, an area of the car which had been manipulated prior to or during the race could be "covered up" per se from damage during an extensive burnout. But that would require foreknowledge by the crew chief, the pit crew and the driver (who actually does the burnout). In reality, NASCAR has never found any team guilty of using a burnout to cover up a rules violation. So in essence, right now there may be a perception problem but there has been no proof of an actual one. – Jim Utter

What are the yellow, red, etc, stickers pit crews put on the front grill of the cars during race? - From Larry

Hey Larry, the tabs are different layers of tape that teams put on the grille in order to gain downforce on the front end of the car. It's one of the easiest ways to tune the car. But if the engine gets hot or something else is compromised, then the tape is the first to go. – Lee Spencer

I want to know why they call a race for the Championship the playoffs because there is no playoffs in car racing there's a championship for the best driver and crew it's not no ball game it's a car race? - From JD

JD, in full disclosure, I prefer calling NASCAR's post-season The Chase. However, non-race fans didn't know what a Chase was. So in an effort to attract the stick-and-ball crowd, NASCAR elected to call its championship format The Playoffs. In a traditional sense, it's not a playoff where one team faces another. However, there are eliminations. – Lee Spencer

The Charlotte BOA 500, the 95 team went to the garage made repairs to the car. they were allowed to reenter the race. the rule was enter the garage or go behind the wall your day has ended. take more than five minutes your day is over. What changed? - From Jerry

Jerry, the five-minute rule only applies to crash damage - damage to the vehicles as a result of its participation in an accident. Teams are allowed to go to the garage to repair mechanical issues. In the Bank of America 500, the No. 95 suffered a broken gear cooler, which caused his issues on the track. Therefore, he was able to go to the garage, make repairs and return to the track. – Jim Utter

Send in your questions now:

If you have a specific question for one of us feel free to send it in. Did something happen at the track that you want to know more about but couldn’t find the answer anywhere? Send us a question.

Questions can be sent any day of the week and we’ll post answers in a timely fashion in our NASCAR section at Motorsport.com.

Get your questions in and be sure to follow every NASCAR series all season long on Motorsport.com.

How F1 can slot lost races back into the calendar