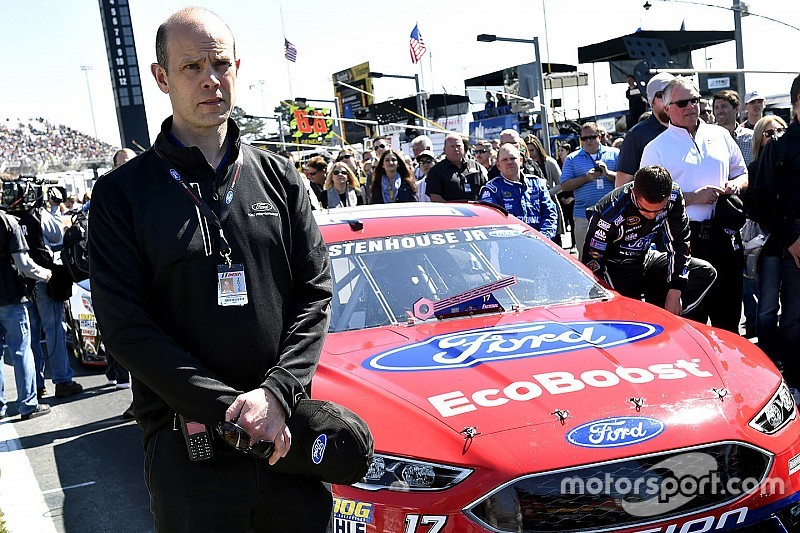 Perched on the backstretch with a view of Martinsville Speedway, Mark Rushbrook, Global Director, Ford Performance Motorsports was settling into his new role.

Although Rushbrook won’t officially take over as Ford’s racing boss until December 1, as Motorsports Engineering Manager for the last four years, he’s well prepared for this latest challenge.

Under the NASCAR umbrella, Rushbrook will oversee the efforts of three flagship Monster Energy Cup efforts--along with their technical alliances--as well as the reorganization of its Xfinity Series program.

We’re working to keep all three of those teams strong and working together where it makes sense and working independently so they can race against each other.

When you enter the Ford Performance motor coach, a poster of three iconic vehicles—all in a vibrant cobalt blue—catches the eye. There’s the 2017 GT, which won the 2016 Le Mans 24 Hours before its latest release. There’s the Ford F-150 pickup truck, the best-selling vehicle in the U.S. since 1981. And then there’s the Ford Mustang, America’s quintessential pony car and the most popular sports car around the world.

Ford has campaigned the Mustang in NASCAR’s Xfinity ranks, but there has been overwhelming support to follow Chevrolet’s lead with the Camaro and bring it to the Monster Energy Cup Series.

“Our approach to motorsports is we always have a five-year cycle plan in terms of where we’re competing,” Rushbrook said. “So, just like our cycle plan across all of our different motorsports, it’s the same within NASCAR. We’re always looking at what the actions are that we need to take to be the most competitive in terms of delivering the wins and championships—as well as relevance to our street car and what we want to accomplish on a marketing perspective.

“I think all I can say at this point is that we’re studying and taking actions to meet the goals that we have.”

Does that mean nothing in the way of a proposal featuring the Mustang for the 2019 or 2020 Cup competition has been submitted to NASCAR?

After deafening silence, Rushbrook smiles and adds, “Stay tuned. We’re always working on projects like that to be ready to capitalize when the time is right. Again, we want to win races and championships.”

Rushbrook has the perfect demeanor and background for the job. The 50-year-old Ligonier, Pennsylvania, native received his Bachelor of Science in Mechanical Engineering at Penn State before moving to the University of Michigan, where he received his Masters in Mechanical Engineering  and Business. Rushbrook then signed on with Ford Motor Company in 1999 and has remained there ever since.

“They have only improved across all of our teams—the existing teams that we had at the time with Team Penske, Roush Fenway, RPM (Richard Petty Motorsports), Front Row and then introducing Stewart-Haas into our mix was a big move for us,” Rushbrook said. “The Wood Brothers, and they’re relationship with Penske. They have a proud heritage but their ability to learn from Penske and take that to the track was a great extension of that.

“I think we have really good relationships them and then as with NASCAR themselves. We’ll continue to grow and improve those relationships.”

Chevrolet has dominated the manufacturer’s championship with 13 trophies in the last 14 years. In 2016, Toyota captured its first manufacturer’s title and shows no signs of slowing down. After 14 seasons without a manufacturer’s title, last season Ford recruited Stewart-Haas Racing, which offered four additional opportunities to win races, particularly with the acquisition of 2014 champion Kevin Harvick and Kurt Busch, the last driver to win a Cup championship for Ford in 2004.

But it has been a tough transition from Chevy to Ford for SHR. Although the organization started the season with Busch winning the Daytona 500 and Harvick showing speed throughout the year, the No. 4 team’s only visit to Victory Lane was Sonoma in June. While Rushbrook anticipated growing pains, he’s pleased to see Harvick’s performance picking up in the playoffs.

“I think the transitions are always hard,” Rushbrook said. “It’s a monumental transition that Stewart-Haas took on to make this change with us and then worked around the clock non-stop from the end of Homestead last year to the start of the season this year. I would say, with Kurt’s (Busch) win and then at Atlanta the next week, Kevin (Harvick) dominated that race. But unfortunately had a speeding penalty that took that away from him.

“They’ve had fast cars all year. They haven’t always been able to finish off the results, but they have recently. If you look at the metrics from Kansas and the speed in the 4 car, it’s definitely there. They’re performing at a high level, and I’m looking to advancing in the playoffs with Kevin.”

Overall, Rushbrook is currently responsible for 12 Cup teams. Next season, Team Penske will add a third car for Ryan Blaney and continue its relationship with Wood Brothers Racing as Paul Menard returns to Ford. RPM, which has been under the Ford banner since 2010, has yet to announce a manufacturer alliance for 2018.

At 41, Harvick is the veteran driver in the Ford stable. As a response to Toyota’s success driver development campaign, Ford has enlisted 22-year-old Chase Briscoe. The Camping World Truck Series driver successfully adapted from dirt to win the 2016 ARCA championship in his rookie season before graduating to NASCAR.

Briscoe, who currently drives for Brad Keselowski Racing, was fifth in the standings entering Talladega two weeks ago before a faulty valve cover derailed his chance of advancing to the Round of 6 in the series Playoff. Still, in 20 starts, Briscoe has posted three poles, has been running at the finish of every race and earned an average result of 9.3.

“We thought starting a driver development program was a strategic move to feed drivers into the Xfinity and Cup level,” Rushbrook said. “We started it with Chase. He's our only Ford driver, but we plan on continuing his development and expand the program when it makes sense.”

Rushbrook is also looking at an alignment between the Xfinity Series teams to enhance the competitiveness and efficiencies in the program.

But for a company that after 120 years of competition rebranded itself as Ford Performance, there’s only one objective for Rushbrook.

“We want to win races, and we want to win driver and manufacturer championships,” Rushbrook said. “Our strategy has been three strong teams. We’re working to keep all three of those teams strong and working together where it makes sense and working independently so they can race against each other.

“We’re trying to find that balance of sharing across those teams and maintaining independence and competitiveness among those teams.”

Hamlin: "There was absolutely no intent" to wreck Elliott