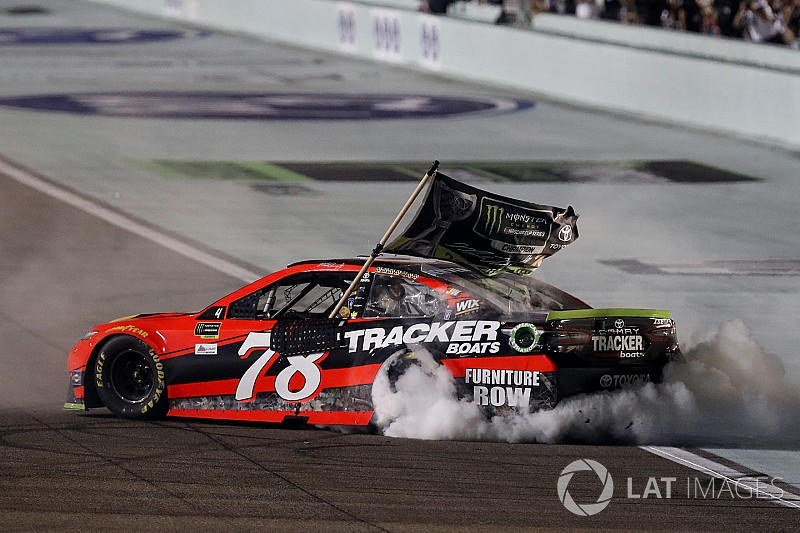 For all the setbacks Martin Truex Jr. has endured in his career, nothing stood in his way over the final laps of the Championship 4 race at Homestead-Miami Speedway.

No, Truex, 37, didn’t have the fastest car on Sunday. But the driver of the No. 78 Furniture Row Racing team, who had been the class of the field in the Monster Energy Cup Series all year, dug deep one last time for the most impressive victory of his career.

We had a lot of stuff this year that could have derailed us, a lot of challenges off the track

Truex retained the lead after the final pit stop and held off Kyle Busch over the final 34 laps to win the Ford EcoBoost 400 and the 2017 Cup Championship.

“I feel like I've run 20 laps before like that a lot in my career but never with that on the line,” Truex said. “You know, in 2015, I think I could have done it, but I don't know. Before 2014, I know I couldn't have. I would have been probably spun out a bit, nervous as all hell. But (Sunday) night I was like, 'OK, just got to find something. Just got to find a little bit.'

“And I found it, and it was like, 'OK, here we go, I've got this.' Started clicking them off, and we got to about five to go, and I was like, 'This is working pretty good. Just don't screw up, dummy.' I don't know that before 2014 I could have done it, to be honest with you. I don't know. A lot has changed since 2014, and I just -- I love what I'm doing. I've got confidence in what I'm doing, and I know that if I screw up, tomorrow is going to come.”

Truex hasn’t always held such a balanced perspective. He has matured tremendously over the last few years. Given the trials he has faced, the Mayetta, New Jersey native really had no choice. And when his girlfriend of 12-years, Sherry Pollex, was diagnosed with stage III ovarian cancer in 2014, Truex had to man up.

Certainly, Pollex, 38, has been an inspiration not only to Truex, but to the entire Furniture Row Racing team. Her battle has become their battle. And after he won the championship, she was waiting for him at the car.

“I told him that's why you never give up, because these guys are so cool,” Pollex said. “That's been our motto all along, ever since I started my cancer battle. We were never going to give up, and we didn’t.”

If Truex felt snake-bit throughout his career, that’s understandable. Initially, winning came easy to him. He won 12 races and  consecutive Xfinity titles in 2004 and 2005 with Dale Earnhardt Inc. before graduating to the Cup Series in 2006. The following season, Truex scored his first career Cup win at his home track—Dover International Speedway—and qualified for the playoffs. But his buddy, Dale Earnhardt Jr., who had initially recruited Truex, left DEI for Hendrick Motorsports at the end of that year.

DEI shut down after 2008 and Truex was shipped off to Earnhardt Ganassi Racing when the two organizations merged in 2009. From a performance standpoint, it was the worst season of his career. Truex had an average result of 21.9 and finished 23rd in the Cup standings.

Michael Waltrip Racing recruited Truex for the 2010 season. However, it wasn't until 2011, when he was aligned with a young engineer named Chad Johnston, that Truex started to find his groove. In their first 23 races, Truex scored three top fives and nine top 10s. After a five-year absence from the post-season, Truex returned to the playoffs in 2012. After a six-year absence from Victory Lane, Truex returned at Sonoma with Johnston in 2013.

But his professional career came crashing down once again. After MWR attempted to manipulate the outcome of the final regular-season race at Richmond in 2013, Truex’s long-time sponsor NAPA cut ties to the organization and the driver’s future was uncertain.

“When I found out after Richmond that NAPA was leaving, that I was losing my sponsor and that my contract would be gone, I truly didn't know if I would ever race competitively in the Cup Series again,” Truex said. “I didn't know if I'd ever have a chance at winning.  Hell, I didn't even know if I'd have chance of driving, period.

“So Sherry said, ‘Don't worry, it's going to be fine, things happen for a reason.’ I was like, ‘Yeah, whatever, you're damned crazy.’”

But Pollex was right.

With Kurt Busch leaving for Stewart-Haas Racing in 2014, a seat had opened at Furniture Row Racing. GM Joe Garone asked Truex if he would be interested. Busch had qualified for the playoffs and the No. 78 team was on the upswing. Truex accepted FRR’s offer.

Falling out of the 2014 Daytona 500 was the least of Truex’s worries that season. As solidly as Busch ran in the equipment the previous year, the new chassis Furniture Row elected to use through its technical alliance with Richard Childress Racing simply didn’t fit Truex’s style. He convinced team engineer-turned-crew-chief Cole Pearn that something wasn’t right. The team went back to the drawing board and came up with a new chassis.

For Truex, life improved on the race track. But his personal life changed forever in August 2014, when Pollex was diagnosed. The couple embarked on the greatest battle of their young lives—one that hasn’t quite ended yet. Pollex had a recurrence in May. She had surgery two months later and still endures chemotherapy every four weeks.

The drive of a champion

It’s not surprising that Truex approaches racing—and life—differently now. In the last three seasons, Furniture Row Racing has improved its resources, and Truex has responded. On Sunday, when he raced Kyle Busch, considered by many to be the best racer in NASCAR, Truex elevated his game once again.

“Really, those last 30 laps, that's Martin,”  Pearn said. “For anybody that doesn't believe that he's a champion, I don't know, that was one of the best drives I've seen. We didn't have the best car by any means, and he found a spot on the track to be able to make it work and outran the best car, and the best car was Kyle Busch. I really just hope out of this the accolades come for how unbelievable a driver he is.

“I continue to believe every day in his talent level, and a lot of times we get a lot of credit as a team, because maybe in his career he didn't have the success he's had since we've been together. I think that bodes for us getting a lot of the praise. He's a champion…this was not an easy one for us, and really, he put it on his shoulders there because we were out of ideas. We were doing everything we could, and we made the best calls we could. I can't take away from that. But at the same time, he put it on his shoulders and made it happen.”

Truex chuckled when asked about the pundits who questioned whether a driver who had not won a Cup tittle could persevere among three former champions. He was quick to remind those in the media center that the team was among the Championship 4 in 2015.

“We had a lot of stuff this year that could have derailed us, a lot of challenges off the track,” Truex said. “(Fabricator) Jim Watson passing away at the racetrack at Kansas during the weekend, all the things Sherry has gone through, the team is part of that. They love her. She's part of our team.  You know, Cole's best friend dying (in August), and we win Watkins Glen. I think we thrive under pressure.

“And all those crappy days we went through, we had to look at each other and hug each other and say, I've got your back. You know, you doing okay, what do you need, do you need something. All those days that we had each other's back like that, when the pressure of the championship ‑‑ Ford Championship Weekend came along, it was like, let's go show them who we are, show them what we're all about, and we did it.”

Pollex delighted in Truex’s achievement on Sunday. As the daughter of former 2000 Xfinity Championship team owner Greg Pollex, she understands the extremes of racing all too well.

While she’s too humble to take credit for Truex’s development, Pollex is proud of seeing the man that Truex has become.

“Everybody is battling something, everybody is fighting something in their life, not just cancer, but any kind of struggle that they're going through in their life,” Pollex said. “We always say if you can fight a struggle with a positive attitude and just have a smile on your face and find the good and the silver lining in everything, in the end you'll come out, and karma will pay you back and good things will happen to you.

“We try to do as much as we can with our foundation and Sherry Strong to help other people, and I keep telling Martin if we continue to do that, good things will happen to us, and this is the best thing that could happen.”