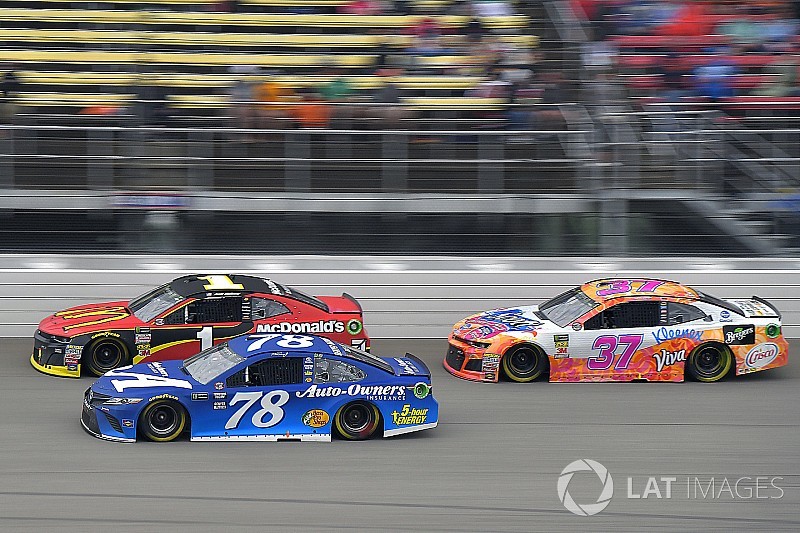 Sure, Truex has had worse finishes this season and 18th isn’t exactly terrible.

But it was the worst finish for Truex and his No. 78 Furniture Row Racing team this year in a race in which they did not get collected in an accident.

Truex and his crew chief, Cole Pearn, just could not seem to remedy the handling issues Truex faced throughout the race and the last opportunity they had to take a big swing at it never materialized because the race was cut short by rain.

“We never could get to where we needed to be,” said Truex. “The steering was wacky, the car was bouncing, just not a good day. You’re going to have a race like this over a 36-race schedule.

“We’ll look at everything to see where we went wrong and then enjoy the weekend off for Father’s Day before heading to Sonoma for the road race in two weeks.”

Truex finished 11th in Stage 1 and 15th in Stage 2 and never was in contention for the lead.

At various points in the race, Truex voiced his frustration over his team radio.

“Unbelievable. I have no idea what’s going on,” he said early in the race after sliding back to 16th.

“Is (the splitter) way in the (expletive) air or something? I can’t get close to anyone,” he said later to Pearn.

On the final pit stop following the break between Stages 2 and 3, Pearn elected to make big changes in hopes of improving the car’s handling, but the race remained green for only three laps before a caution for a wreck.

Before the race could get restarted, rain picked up and NASCAR brought an early halt to the event.

Truex, who won his second race of the season last weekend at Pocono, dropped from fourth to sixth in the series standings. He is one of four drivers – Kevin Harvick, Kyle Busch and Clint Bowyer are the others – with multiple wins this season.

Third at Michigan, Kurt Busch says "our day will come"