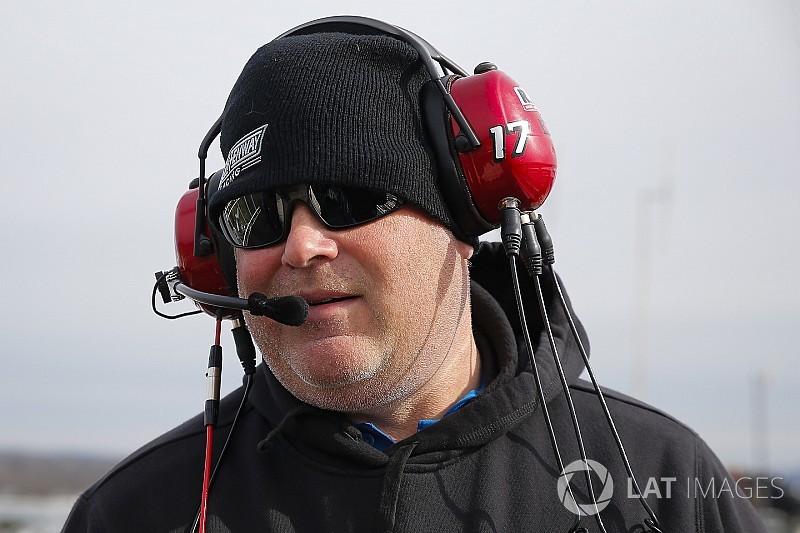 This week, Motorsport.com caught up with veteran spotter MIke Herman Jr., who helped Ricky Stenhouse Jr.  score his first NASCAR Cup Series win last season at Talladega (Ala.) Superspeedway where the series visits this weekend. Herman is one of the most versatile spotters in the business spotting all three NASCAR national series race for drivers and also finds time to spot in the NASCAR Whelen Modifieds, K&N and ARCA series as well.

What was last spring like for you and Ricky Stenhouse Jr. during the race at Talladega?

Relief. We had knocked on the door at Talladega and Daytona before, and it was just a sense of relief to finally get that win. The team gave us a super fast Ford to work with, and it was great to be able to capitalize on it for Jack Roush and the entire Roush Fenway organization.

How did you become the spotter for Stenhouse?

That’s a long story, that started way back in 1983, kart racing at Lincoln County Speedway in Lincolnton, and Westrac USA in Tyro.  One that took me through a long career of short track racing in Late Model Stock Car and the ProCup Series. Starting in 2007, I transitioned from driving to spotting, mostly in K&N and ARCA. From there I just worked the ladder, until I got my first Cup job as a primary spotter with Tony Raines in 2011, then with Martin Truex Jr. in 2013. That path led me to Stenhouse starting in 2014.

How long have you been spotting for Stenhouse and do you spot for any other drivers in addition to Ricky on Sundays.

This is my fifth season with Stenhouse and the No. 17 Team. I spot for numerous drivers outside of the Cup Series, including Ryan Reed in Xfinity, Austin Hill in Trucks, Ryan Vargas in K&N, and Venturini Motorsports in ARCA. I still do a lot of short track racing with Ty Majeski in Super Late Models, and Ryan Preece in Modifieds, when my Cup schedule allows. Preece is my longest tenured driver, this is our 12th year working together.

Multitasking. Whether it’s trying to look ahead, while being in a pack 3-wide, or listening to directives from Race Control, at the same time as the driver and crew chief are talking. Constantly multitasking is a challenge.

By continuing to do my job, feeding information, which means we’re still in the game, still working. When I go silent, it’s time to start thinking about next week. Until then, we fight to the end.

What’s the most rewarding part of your job as a spotter?

Just being able to still be in the sport, making a living. This is my 36th year of non-stop racing. That’s rewarding to me.

Most definitely. I visually put myself in the driver’s seat when I’m spotting. So subconsciously, I still see the same view I did when I was driving.

Do you still get the feeling of competition like you did as a driver?

Absolutely.  It’s been interesting to see the job of spotting evolve in the 12 years I’ve been doing it full-time. It’s gone from strictly being a safety tool, to one of being part of the strategy as well. Today’s spotters are like coordinators in the NFL, or probably the best comparison are pro golf caddies. Their job description is real similar to ours. So the spotter is very much in the game.

Name one aspect of your job that fans might not realize?

Most don’t realize how many races I spot outside of the Cup Series.  Before the season technically started, I had already spotted the Rolex 24, and the Winter Showdown in Bakersfield, Calif. During Speedweeks, between Daytona and New Smyrna, I spotted 16 races in 11 days. After the Cup season finale in Homestead, I still have the Snowball Derby to go. This year alone, I will spot over 120 races. Cup racing is my primary focus, and doing all the other races helps keep that focus sharp.