NASCAR new Chase a return to the mindset of days long past? 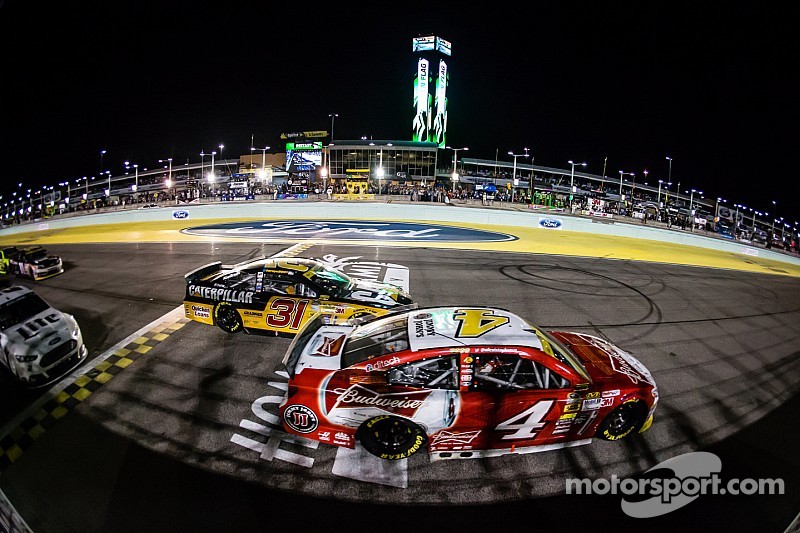 I said not too long ago that this is just a horrible point’s format. Jeff Gordon should be the real champion, etc...

After actually seeing it in action, I can no longer call it horrible.

I feel there should definitely be a few tweaks to the process ... The overall season point’s leader should get a bye into the championship heading into Homestead. For example, along with the three positions attained by winning a race in the last segment, along with bonus points for winning being added to the total after every reset (except for Homestead) and lap leading points in finale to add more strategy, but I’m okay with the actual system.

Now, I’m always going to be in favor of cutting the season down into 24-26 races and getting rid of the Chase. But love it or leave it, the basic method of how to determine a championship in stock car racing has now changed forever. It’s here to stay.

Wait, a return to the roots?

It’s also, believe it or not, a return to the very roots of stock car racing. Back in the day Bill France would promote his races (literally on Daytona Beach) as the “World Stock Car Championship”. After looking at the AAA (The premier racing sanctioner of the day) and how they sanctioned races compared to the other stock car promoters of his time, Big Bill decided the best way to make the best drivers come to his races instead of his rival promoters was to start up an actual racing circuit and points system.

This started with the National Stock Car Racing Circuit (NSCRC) in 1947 and followed up with the formation of NASCAR the following year. After most other stock car promoters either left the sport or downsized their efforts following the Southern 500 in 1950, a huge boon to NASCAR that established it clearly as the stock car racing organization, the points system was still used to provide an incentive to teams to compete in as many races as they could and not just enter Daytona, Lakewood, and Darlington.

Although most big teams didn’t care to spend the money to go to every race back then, they still showed up for the big money, big stakes superspeedway races. If they did, they were either in a factory ride for their manufacturer (Ned Jarrett for Ford, and later David Pearson for Ford as well) or the Pettys, which were practically a factory team anyway. These races meant more than the Championship. I remember reading how when Richard Petty had clinched his then-record fourth championship, I believe he said he was more disappointed than happy because he hadn’t won the race that weekend.

In 1971, Winston came in. But they didn’t care about these small tracks that few big names went to, and so they only were the title sponsor for big tracks. It was confusing, so the next year NASCAR took all of the short tracks and gave them races in the Sportsmen division (Now known as the Xfinity Series). This was a huge turning point, where instead of maybe five to seven full time drivers at most in a 50 some race season, there were over 20 full-timers in roughly a 30-race season. This caused five seasons with four different point systems as the sport adjusted (In 1974, Darrell Waltrip finished second at Darlington and got less points then Richard Petty in 35th), culminating in the 1975 points system that lasted for 28 years.

By the time NASCAR created the Chase, there were (and are) 40 cars running full-time in 36 points races per year. It was either cut the races down (and thus cut money) or create a play-off system. They created a play-off system. Although I still feel they really do need to shuffle the Chase schedule around now, what we found out this year was that everybody’s best track is Homestead when they are in the final four. All four ran well and up front almost the entire day, the only driver consistently able to keep up with them being Jeff Gordon, who just missed the final-four himself.

The people looking at it as being one single race need to remember that this is how championships are won and lost in other sports, hell it’s been what determines Cup championships before ... Davey Allison was well on his way to winning the 1992 championship before being caught up in Ernie Irvan’s wreck at Atlanta. Jeff Gordon was the most deserving champion in 2014,ut the New England Patriots were the most deserving champions in 2007. They ended up making one or two mistakes, like Logano’s team this year, who lost the championship after dominating the season.

1972 is no longer the start of the modern era of racing. The new modern era began at Homestead in November, and it’s going to be around for quite a while.