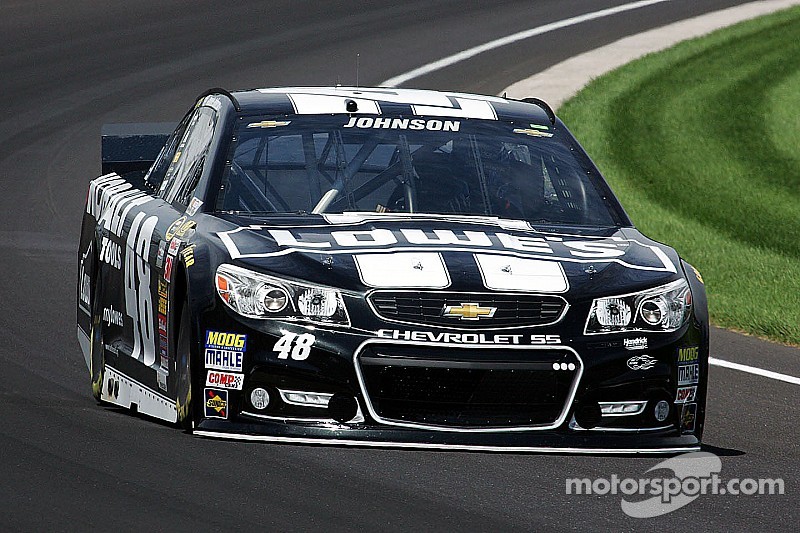 'My natural tendencies just didn't work around this track.'

You’d think a six-time NASCAR Sprint Cup Series champion and a four-time winner at Indianapolis Motor Speedway would have adapted quickly to racing at the Brickyard, but that wasn’t the case for Jimmie Johnson.

Before Johnson found success at the marquee track, he had to start thinking outside the box and drive in a manner that was counter-intuitive.

“My natural tendencies just didn't work around this track,” Johnson said Friday before opening Sprint Cup practice at the 2.5-mile speedway. “I had to make a conscious effort to drive differently. I've been playing that movie in my head, coming here getting ready for this weekend's race.

“So there are tracks that your natural driving tendencies suit, and this just isn't one of them for me. So I've got to change my game coming here. And I've been able to identify with it. I think that's half the battle, is just to understand that (you) don't do what you think you need to do. Try to think in an opposite manner to find speed.”

It took several years, however, for that realization to register.

“There's certain tracks that are very difficult to get sorted out and to know how to lead your team,” Johnson said. “For me, this was one of the toughest ones I came to. Took me a long time to get it. The light finally turned on in my head, I think maybe it was '04, '05.

“Mid-race I'm like ‘I've driven this track wrong since practice opened, set the car up wrong and led my team in the wrong direction.’ In the race it really dawned on me.”

That “dawning” was the functional equivalent of a blazing sunrise. Johnson won races at Indy in 2006, 2008, 2009 and 2012. Last year, he finished second to race winner Ryan Newman.

The last time Kurt Busch came to Indianapolis Motor Speedway, he was hoping to run 1,100 miles on the same day as he attempted the Indy/Charlotte double.

Busch finished the entire Indianapolis 500, finishing sixth, but ran just 406.5 of a possible 600 miles at Charlotte, the result of an engine failure two-thirds of the way through the Coca-Cola 600.

Nevertheless, with only 400 miles on his agenda for Crown Royal 400 weekend at IMS, Busch feels almost as if he’s on vacation.

“This feels like an off weekend now -- I only have to do 400 miles,” Busch said. “The way that the month of May went was a tremendous feeling and a sense of accomplishment. I really enjoyed it all the way through with the two race teams, of course, with Andretti Autosport, Stewart-Haas Racing, and all the people along the way that helped make that double happen.

“Still writing thank-you notes. It's incredible the amount of people that we touched and that reached out to us. So it's a lot of fun to come back to Indianapolis and see (speedway president) Doug Boles again. I won't be bumping into any of the IndyCar folks but the atmosphere here at Indianapolis is always special, and now I have a greater appreciation for the Speedway.

“And I hope the respect that I'm going to show it this weekend, it will help me bounce up on some of my results here at the track. It's been tough in a stock car here for me.”

Though there’s precious little performance transfer between an IndyCar and a Sprint Cup car, Busch hopes the dues he paid in May will translate into improved results in July. His average NASCAR finish at IMS is 19.4, with his only top five (a fifth) coming 13 years ago.

There aren’t many things team owner Roger Penske still has to accomplish.

He has 15 Indianapolis 500 victories. He got his first NASCAR Nationwide Series championship in 2010 and his first Sprint Cup title two years later, both with Brad Keselowski behind the wheel.

But Penske doesn’t have a Brickyard 400 trophy yet, and he has conveyed to all three of his drivers—Keselowski, Joey Logano and Juan Pablo Montoya—just how much he would like to add that to his collection.

“Oh, yeah ... yeah,” Keselowski said after earning the third starting spot for Sunday’s race. “It's the last thing left on the Penske bucket list, and I think that's why you see a third car here with Juan Pablo Montoya. He (Penske) wants to make it happen, and Juan is certainly known for his talents here at the Indianapolis [Motor] Speedway.”

Keselowski, of course, would prefer to be the driver to deliver the victory to Penske.