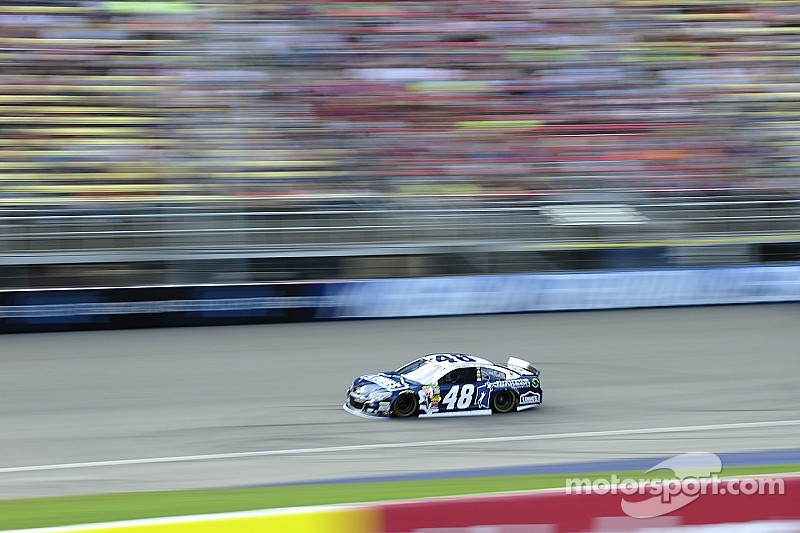 Hopes to recapture the magic he had here two months ago.

Jimmie Johnson finally found his way to victory lane at Michigan International Speedway two months ago. Since then, it's been a rocky road.

Johnson (in photo above), who won here in June for the first time in 25 starts, has led just six laps and has finished 39th or worse three times in the seven races since.

He’s glad to be back.

"We've had the craziest luck over the last six or seven races," said Johnson, who finished 28th last weekend at Watkins Glen (N.Y.) International and dropped a spot to seventh in the NASCAR Sprint Cup Series standings.

“Although we’ve only won here once, it’s been a very strong track for the No. 48 and there is a lot of room on this racetrack, so I think I can be out of harm’s way.”

The six-time Sprint Cup champion left the June race on cloud nine. His victory was his third in four starts and vaulted him to second in the season standings behind teammate Jeff Gordon. He’s already guaranteed a spot in the revamped Chase for the NASCAR Sprint Cup and didn’t seem concerned about a lack of momentum when the playoffs begin Sept. 14 at Chicagoland Speedway.

“It’s nice to have momentum entering the Chase,” he said. “If it doesn’t happen, we’ve won championships that way, too.

“So, we’re taking it as it comes, but it has been a very challenging year.”

Johnson will have a long ride to the front of the field in Sunday’s Pure Michigan 400 (1 p.m. ET on ESPN), where he’ll start 30th.

It wasn’t a record, but Gordon still was the fastest man at Michigan International Speedway on Saturday.

A day after turning the fastest lap in track history and seventh fastest pole speed in NASCAR history, Gordon was the only driver to record a lap faster than 200 mph in the final practice session for Sunday’s Sprint Cup Series Pure Michigan 400.

Gordon, seeking his first win here since June 2001, had a lap of 200.156 on Saturday, eight-hundredths of a second faster than Kyle Larson. It came a day after he shattered the track record with a 206.558 circuit in the final qualifying session in the same car he drove to victory last month at Indianapolis.

Gordon and his Hendrick Motorsports teammates have to be hoping for the same kind of luck they had here in June, when Johnson recorded his first career win here and Kasey Kahne, Gordon and Dale Earnhardt Jr. finished sixth through eighth.

All four drivers are in the top 16 of the standings with three races to go before the start of the Chase for the NASCAR Sprint Cup. Only Kahne, who started the weekend 13th in the standings, has yet to guarantee a spot in the grid with a victory.

Joey Logano, who’ll start next to Gordon on Sunday, had a lap of 198.785­—sixth-fastest overall—in the final practice session.

No one came to MIS happier than A.J. Allmendinger.

A week removed from his first career Sprint Cup victory and the automatic berth in the Chase for the NASCAR Sprint Cup that came with it, the No. 47 Chevy driver still was flying high.

“Just enjoying it,” he said of the last several days. “Having my parents there was so special to be able to share that with them in victory lane.

“I’ve put so much pressure on myself whether it’s this year or the last few years to go out and try to be at my best and I felt like at times if I didn’t win it was a negative on me.”

The win came in his 214th career start and closed the book on a chapter of his life that saw him lose a job with Penske Racing after a positive drug test in 2012. He was reinstated later that season and started 2014 with JTG-Daugherty Racing.

He won’t be a favorite to win the championship and he doesn’t care.

“It can only help us to keep getting better,” he said of the win at Watkins Glen. “We know when it comes to the Chase as a championship contender, obviously our names aren’t going to be the first ones that are brought up. We know that.

“So when we get to the Chase, hopefully we can make just a little bit of noise in it as well.”

Roush Fenway Racing has won 13 times at Michigan, but June’s stop here was a nightmare.

Greg Biffle’s Ford was the only of the team’s three to finish on the lead lap—in 20th— and Carl Edwards and Rick Stenhouse Jr. were 23 and 27, respectively, at the track that’s about 90 miles from Roush Industries’ headquarters.

Edwards, who already has secured a spot in the Chase, is finishing his final season with the team but still wants to give his bosses and crew something to remember.

“This race is special,” he said. “Right now my goal is to go represent Ford and drive as hard as I can for Jack Roush the same way I always have and to get us a championship.”

Edwards, who’s won twice here, will start third and Stenhouse has the 10th spot on the grid Sunday. Biffle, who won last season’s June race to collect his fourth career MIS victory, starts 11th. A win would be especially sweet for Biffle, who could lock up a spot in the Chase. He’ll start the day 12th in the series standings.