The National Association of Stock Car Auto Racing announced Friday a further realignment to next seasons NASCAR NEXTEL Cup Series schedule. The revisions are as follows: Matt Kenseth and Kasey Kahne battle on a restart. Photo by ...

The National Association of Stock Car Auto Racing announced Friday a further realignment to next seasons NASCAR NEXTEL Cup Series schedule. The revisions are as follows: 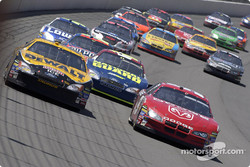 Matt Kenseth and Kasey Kahne battle on a restart.
Photo by Autostock.
The Fontana, California date, previously held in April, moves to the second race of the season on February 27th. North Carolina Speedway (Rockingham) completely looses all of its Nextel Cup dates.

Texas Motor Speedway achieves it's long anticipated second date on April 17th. The agreement of a second date at Texas settles the lawsuit between NASCAR and TMS.

Legendary Darlington Raceway loses one of its dates. It will now be a Saturday night race on Mother's Day weekend, May 7th.

The move comes after an announcement in 2003, by NASCAR, called "Realignment 2004 and Beyond". The plan calls for a yearly review of all current dates, and movement forward of widening NASCAR's scope to the Midwest and West Coast.

"NASCAR continues to reach out to new fans in all four corners of the country," said NASCAR Chairman Brian France. "The Southeast will continue to be well served with great racing."

Last season, NASCAR moved the Southern 500 Darlington event to November, enabling them to grant California Speedway a second date on Labor Day weekend. The traditional Labor Day Darlington race moved to the NCS November slot, leaving Rockingham with only one date in 2004.

As expected, poor ticket sales and substandard facilities finally caught up with North Carolina Speedway, as it is now just an entry in the NASCAR history annals.

"Our sport is growing and moving faster than ever," France continued.

When asked about the concern of loyal fans, that three of the six Carolina race dates have been lost in the last two years, France was rhapsodic, "There is plenty of good NASCAR racing in the Southeast. There's plenty of opportunity for our fans to see the sport the love."

Notably, International Speedway Corporation has purchased Martinsville Speedway. It is expected that Martinsville will loose a date as early as 2006, when facilities in New York or Seattle are able to host a NEXTEL Cup series date.

"We think all these moves help us in the long run to grow the sport, " said France. "Realignment is going to continue. "